4. A Breath of Fresh Eyre

4. A Breath of Fresh Eyre

Our first stop on the Eyre Peninsula was at Point Lowly just before the steel town of Whyalla. This tiny piece of land pokes its old stone lighthouse proudly out into the depths of the Spencer Gulf. With a boat ramp and jetty on one side, a wide sandy beach on the other and campsites dotted throughout the ubiquitous seaside fishing shacks it would have once been a quiet little piece of paradise but these days it also hosts a massive oil refinery complete with an enormous tanker wharf.

Nevertheless, we still managed to find a terrific spot right on the edge of the water but almost as soon as we had set up camp the fellas could hear the big ones calling to them from out in the deep. After they had trotted off to try their luck with a rod and reel Mrs G and I were left to fend off a trio of backpackers who cheekily tried to move in on our turf. Sadly, our efforts were not fully appreciated by our menfolk who later returned with a feed of snapper and squid once we pointed out the offending pair of bikini clad Dutch girls frollicking happily with their Spanish companion on the beach below.

That night all was forgiven as we feasted on fresh fish while basking in the intermittent glow of the lighthouse, not to mention the glitzy glamour of the oil refinery lit up like a shimmering Christmas tree complete with an enormous tanker shaped bauble hanging off the end of its wharf.

The next day dawned bright and sunny, so the fellas decided another day?s fishing was in order. Their early departure bought peace and calm to our little campsite but it was short-lived as they returned only a few hours later full of stories about the ones that got away as well as a pod of dolphins playing around the boat. Mrs G was sufficiently intrigued to venture out with her camera for a closer inspection but as my diary was already filled with reading and writing tasks, I demurely declined.

Our sunburnt trio returned hours later oddly enough, just in time for beer o?clock. Mrs G confirmed my suspicions that although there had been sightings of dolphins and even one or two happy snaps taken, the afternoon?s expedition had consisted mostly of fishing.

We pulled out the next day and slowly wandered down the coast checking out some gloriously deserted beaches before winding up in the tiny coastal village of Arno Bay. Throwing caution to the wind, we lashed out and booked two powered sites in the little caravan park. As soon as we had all four washing machines going, the gorgeous Mrs G produced her clippers and set up for business. By the time our washing was done, both our fellas were sporting buzz cuts and had been sent to the shower block with strict instructions to shave every last whisker clean off their faces.

Later, we stepped out with our well-groomed menfolk to promenade along the boardwalk of the nearby wetlands. Our tour finished at the beach so the fellas waded through the weed-choked shallows towards the pier leaving Mrs G and myself happily collecting shells amongst the dunes.

This burst of non-fishing related activity left The Driver with an enormous thirst however, his pal Peter Perfect was not yet ready to partake as he planned to clean, preen and Mr Sheen his pride and joy (aka The Cruiser). This left The Driver with no other option but to supervise the entire job across the top of an amber ale, or two. Or three. But, never fear, our Mr Perfect quickly caught up with him when his work was done.

The next day, one gleamingly clean car and camper followed a large off white mud spattered, bug-covered motor home towing a grotty boat all the way down to Port Lincoln. In town, the fellas checked out the maritime museum while Mrs G and I did some shopping then, we all headed off to find the council?s RV camp. This turned out to be perfectly sited, according to The Driver, behind the marina and right next to a boat ramp on the outskirts of town. 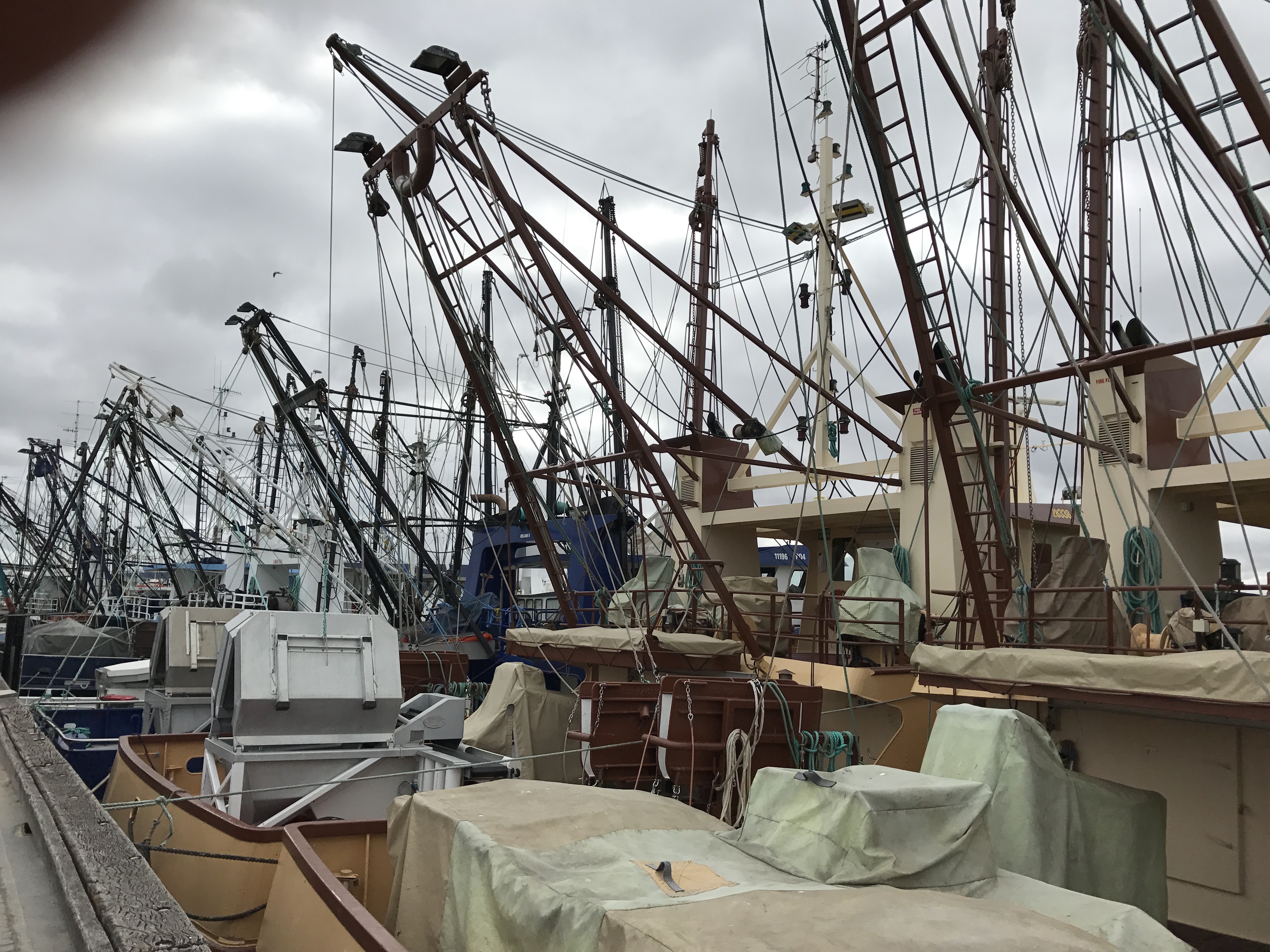 We toured past rows of large twin armed prawn trawlers that were waiting for the season to start but these were dwarfed by the mighty tuna boats swaying in the pens beyond. Their sky-high masts sported crow?s nests guaranteed to induce seasickness in the most seasoned of pirate, let alone the poor deckie whose job it was to spot John West?s rejects out in the icy rolling seas of the deep dark Southern Ocean.

After a tour of the local sights, including several marine chandleries, some tackle shops and The Drivers? old favourite, Bunnings, Mrs G suggested a spot of lunch might be in order. No sooner had we settled down to await our meal than a nearby trestle table filled with shiny books caught my attention. A closer inspection revealed a chance meeting with some members of the local writers group selling their wares. Needless to say, I eventually returned to my travelling companions armed with several volumes of new reading material plus an invitation to attend their upcoming writers festival. Sadly, we would be long gone by then but never fear, their glossy brochure was stashed away in my bucket list.

Later that afternoon Mrs G and I took a stroll (ie. a fast paced stride) along the beach track and through the marina housing estate admiring the tropical gardens surrounding the eighties inspired pastel-toned render of the curved terracotta roofed townhouses. By then, the day had become quite hot and humid, so we may have stopped for ice cream on our return journey but we were well finished by the time we returned to camp to find our fellas and their boat missing in action so we happily put the kettle on and put our feet up. Later, the cool change hit with a vengeance like something out of an episode of Gilligans’ Island and by the end of their three hour tour our fishermen finally returned to dry land soaked and shivering but completely and utterly fishless.

We pulled out the next day stopping to check out the famous oyster town of Coffin Bay. Just past this quaint village we happened upon an old establishment belonging to that rarest of breeds, an enterprising Irish farmer. The old boy had built an extra four-roomed wattle and daub dwelling complete with slate floor and an outside loo on the outskirts of his sheep farm. As it was situated on the track that horse drawn coaches favoured to ferry their passengers across to Perth and could be staffed by his many offspring our farmer found it a simple matter to brew up a billy and sacrifice an old ewe to a pot of mutton stew every so often. In this way the place quickly became the preferred coach stop and consequently, said farmer retired a very wealthy man. 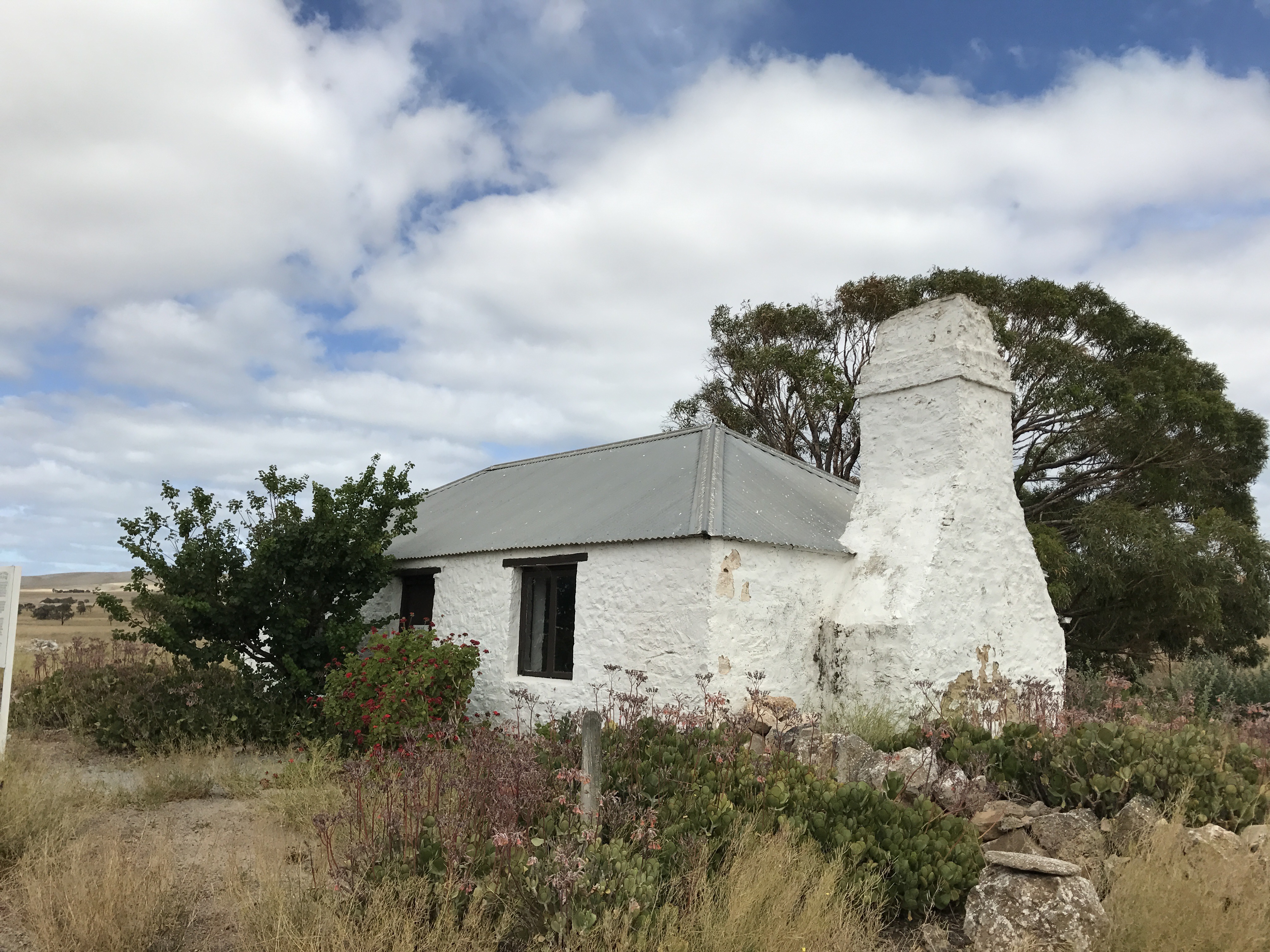 Moving on, we stopped to enjoy the views and taste test the wares of the bakery in the pretty little beachside town of Elliston. The more adventurous members of our gang (ie. everyone but me) decided to explore the nearby cliffs and caves while I supervised from above. Inspired by their expeditions we headed off towards Talia Beach where they even convinced me to join their climbing, clambering and cave-combing antics.

That night we made camp at nearby Coodlie Station. The owners of this 300 acre sheep farm have regenerated much of their land with native bush and added a sustainable campground built using rustic materials sourced from a nearby oyster farm. There?s a composting toilet block, a unisex bucket shower room and an old woodstove in the camp kitchen. This is vintage recycling so fine it would make any Brunswick hipster swoon.

These clever folk also run an eco tour company taking minibus loads of European tourists across the Nullarbor from Adelaide to Perth (and back the other way), conveniently overnighting in purpose built swag huts at their campsite as part of a 10-day fun-filled tour. We joined their noisy campfire that night and met people of all ages who had travelled from exotic locations around the world to enjoy this authentic Australian outback experience.

After waving goodbye to our European friends, we hit the road headed towards Streaky Bay. The first stop scheduled on our detailed itinerary was Venus Bay. This cute little prawn-fishing village consists of a petrol station, a licensed general store and a caravan park. There?s a few fishing shacks dotted along the bay with some more substantial holiday homes taking up the better views on the cliffs but the outlook from all of them is pure serenity.

We all loved it so much, we decided the road ahead could wait while Mrs G and I quickly settled in to one of the friendliest little caravan parks around to soak up the sun and our fellas launched the boat to cast out a line. They returned bursting with pride in their haul of 16 whiting until they joined the line at the fish cleaning table and spotted buckets brimming with fat glistening tuna and piles of the whopping big Red Snapper the locals call Nannygai.

We finally made it to the scenic hamlet of Streaky Bay to find the streets deserted, only the petrol station and the church were open for business. As we had no pressing need for religion the attendant at the bowser informed us we had arrived on the day after their famous horse race, The Streaky Bay Cup. We surmised that everyone else in town must’ve had a very big day on the soft sandy turf!

Hello intrepid travellers! Just been catching up on your adventures on a quiet Sunday arvo in Eaglehawk. Port Lincoln writers festival sounds like a goer…