5. Across the Nullarbor and Beyond…

5. Across the Nullarbor and Beyond…

While I only just managed to survive the forty-five degree heat of Streaky Bay by bobbing along on my noodle in the shallows for most of the day with my bikini clad companion the gorgeous Mrs G, our intrepid fishermen launched the boat on the high seas in search of yet more scaly treasures.

The highlight of my day was the discovery that the caravan park kiosk not only sold chocolate coated ice creams but that it was also conveniently situated next to an air-conditioned games room complete with free Wi-Fi. Meanwhile, Mrs G got to work putting the luxurious state of the art ensuite-style ablutions block through its paces.

But our reprieve from the heat was to be short lived as two hot and cranky menfolk sulkily sucking on icy cold beers greeted us chilled out chicks back at camp. Apparently, their fishing expedition had not been as successful as planned and apart from watching a pod of dolphins swim and play with their young around the boat they had not had a very good day. Another refreshing swim was duly prescribed followed by a long shower in the swanky facilities before a very welcome cool change finally descended with nightfall.

Ceduna was our first stop at the beginning of the infamous Nullarbor where we planned to stock up on fuel and groceries before trekking across the desert like those rugged explorers of old, the Leyland Brothers. However, after Peter Perfect got talking to another caravanner our itinerary took yet another detour and we turned left towards Fowlers Bay.

This sleepy little hollow had once been a hive of industry for shipping, whaling and kangaroo hunting. With a grand town hall, two churches, a post office and telegraph station plus many fine homes including a wealthy sea captain?s grand residence of 17 rooms containing a ballroom with custom made leadlight ceiling panels, it was obviously very much a social hub too. But the glory days didn?t last and by the 1950?s the town was completely abandoned. Sadly, sometime later the massive sand dunes surrounding the town swallowed its main street. So these days, very little remains except the old post office, the pier, a few weekender?s houses, a general store and a bush style campground.

While I enjoyed my own version of time travel, the fellas strolled out to the end of the pier to get an update on life from a local fisho. But the Gorgeous Mrs G couldn?t resist climbing to the top of the sand dunes to check out the view. The canny old fisho spotted her up the top and as you can see from Peter Perfect?s photo she was so far away she looked like a stick figure.

That night, we enjoyed a lively campfire dinner in the company of a few well-marinated characters with many a whopping tale to tell. The next morning Peter Perfect was up bright and early determined to climb higher in the sand dunes and to prove the point, he scored a top sunrise shot for his efforts. 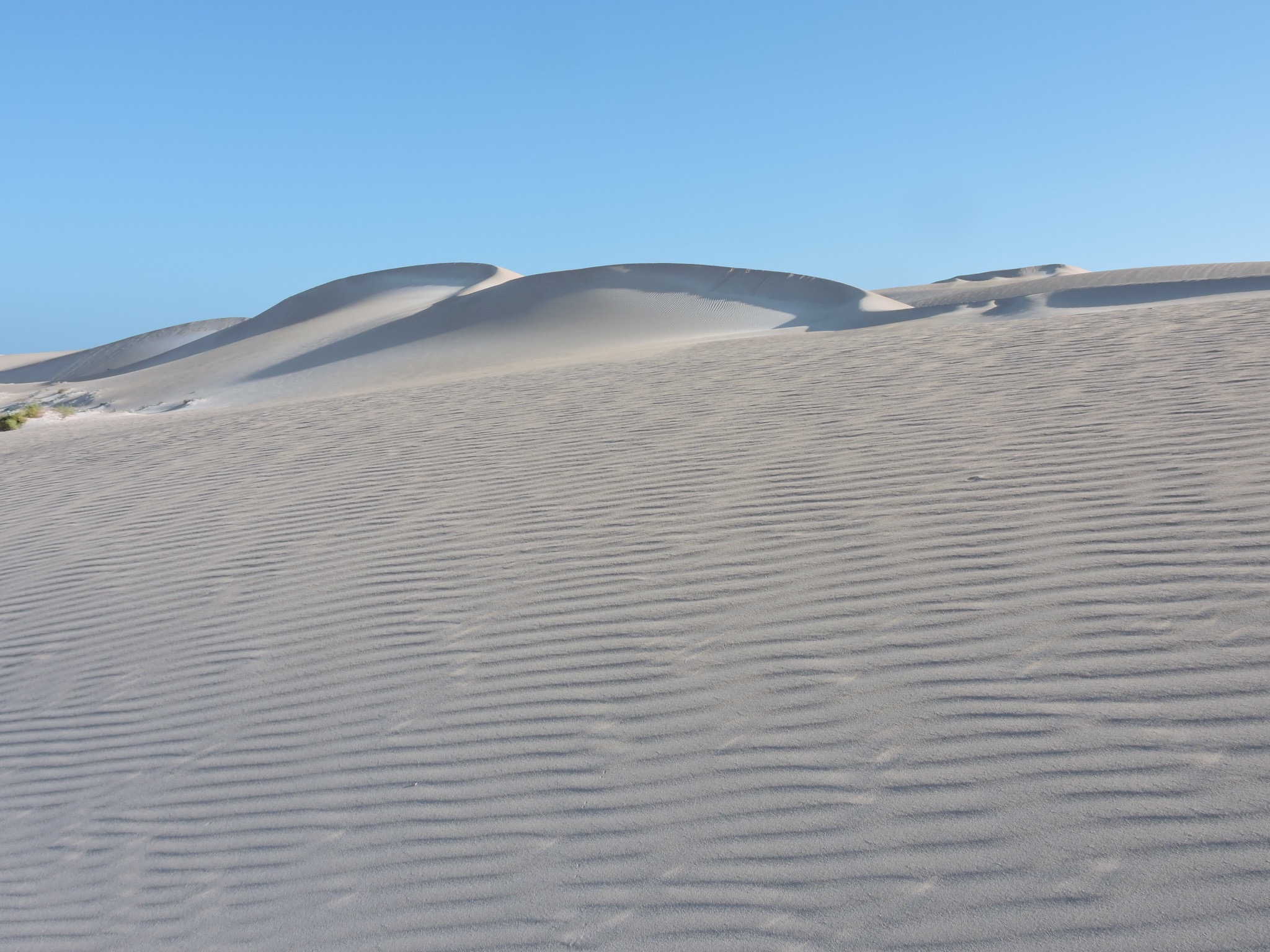 Once again we hit the road bound for the Nullarbor where for some reason I had expected that there wouldn?t be much to see but the views were incredible.

After a day of driving we set up our camp on the edge of a cliff. Well, as close to the edge as the Gorgeous Mrs G could comfortably manage. She had admitted to feeling nervous about the ?DANGER! Crumbling Cliff? warning sign so of course, the fellas had to push her fears to the limit and explored well beyond the safe line she had marked out in the sand. That night we had so many other travellers walk through our campsite to enjoy the sunset view we could have charged admission however as Mrs G drily commented, none of them kept behind her safe line.

Just as night fell, I faced my own fears when a mouse ran across my feet and after almost tipping right over onto my back when I lifted my feet I then found myself marooned on my chair in a screaming heap. The Driver thought it was all too funny as I took an almighty leap from said chair to the safety of the motorhome and adjourned to bed. Needless to say he found his pillow had been moved to the penthouse that night.

All was forgiven as we drove on the next day against a prevailing headwind and crossed the border into Western Australia. After we?d handed over our highly illegal peeled potatoes and fresh fruit salad (while the Gorgeous Mrs G was allowed to keep her peeled carrots and tossed salad), we sought refuge for the night in a secluded bush camp well away from the cliff, the mice and the constant whooshing of the road trains to spend a night quietly toasting bread over an open fire. 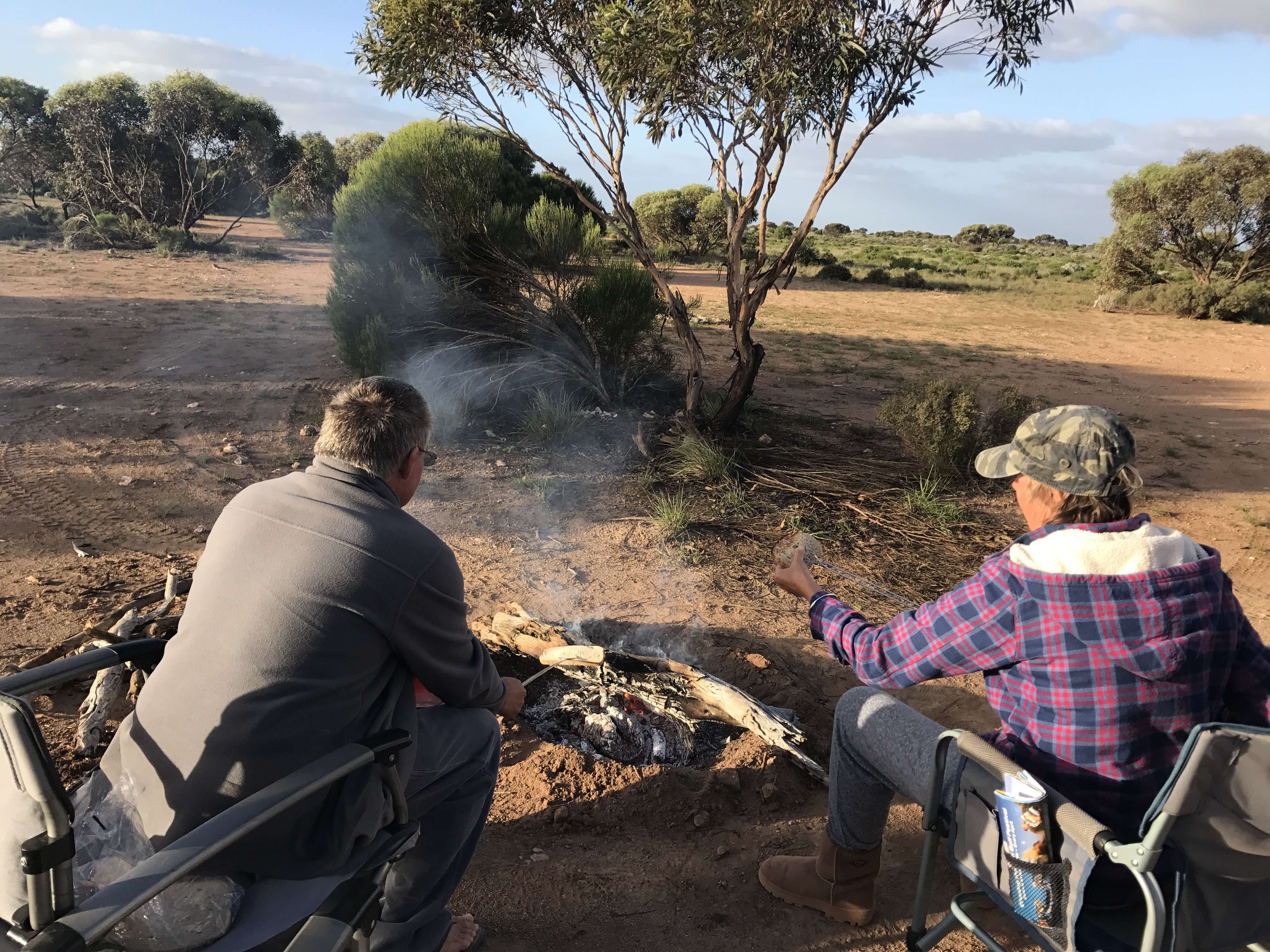 The next day in much lighter winds we tackled the 90 mile straight and explored the ruins of the old telegraph station as well as the NASA Skylab crash site and ended our intrepid crossing at the tiny settlement of Gibson Soak, just out of Esperance.

Three days of driving had left both The Driver and Peter Perfect with an almighty thirst so as soon as we had pulled in to the roadside camp conveniently located next to the pub our fellas were off to put the local brew to the test. As there seemed no hope of luring either of them off their barstools to fire up the BBQ that night we all dined in the elegant surrounds of this quaint historic tavern.

The next day Mrs G and I were deposited in town at a grotty old laundromat while the boys took off to ?get a few things?. Luckily, the smell of fresh coffee and the offer of free wi-fi lured us across the road to the local golden arches to await our chauffeurs? return. Meanwhile, after completing a tour of all the auto parts, hardware and tackle shops, The Driver received an initiation into the intricate workings of a car wash as Peter Perfect gave his mighty Cruiser another thorough spit and polish.

At first he seemed bewildered by Mr Perfect?s cleaning activities but after a few days sightseeing around the magnificent turquoise beaches of Esperance including yet another taste test at an artisan brewery our dirty old BounceRV also received the royal treatment of a full wash and detail. Wonders will never cease?