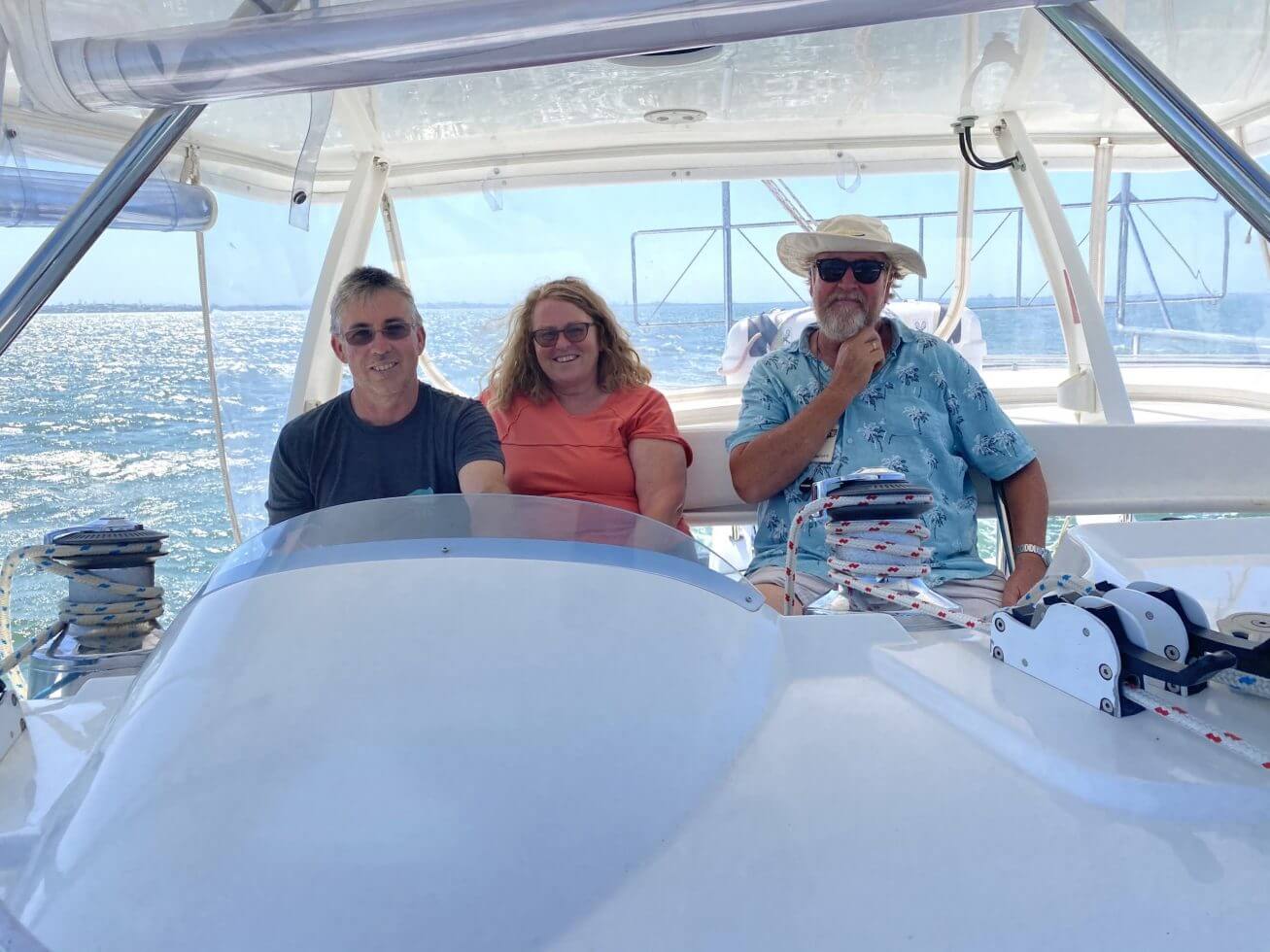 Finally free to travel after so long in lockdown, the Skipper and I flew out of an eerily quiet Melbourne airport on a drizzly grey morning wearing face masks, following strict social distancing measures, applying sanitiser and thoroughly wiping down everything we touched. 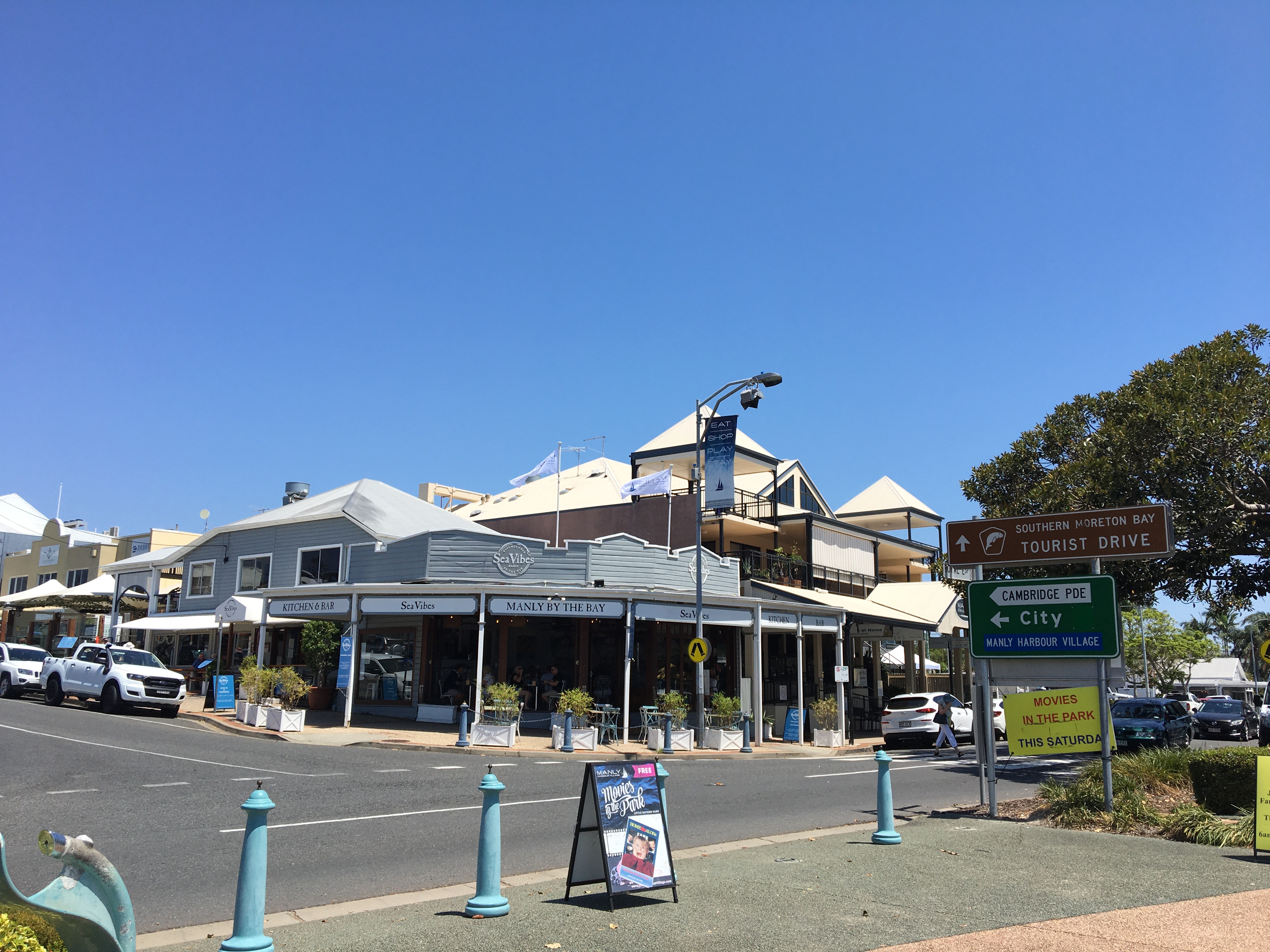 Two hours later, sunshine, clear blue skies and unmasked, actual mouth-smiling ground staff greeted us at the Brisbane terminal almost as though we?d stepped off Hogwart?s Express and arrived in an alternate universe.

We were collected from the airport and transported (sadly, in an ordinary twin cab ute, rather than a jet-powered broomstick or a magical flying steam train) to the massive marina on Moreton Bay at Royal Brisbane Yacht Squadron to undertake the first inspection and the all-important sea trial of our new ‘boater- home’, Ruby Blue prior to settlement the following day.

To say we were overwhelmed would be understating the raft of emotions we were both experiencing. From excitement for our new live-aboard cruising lifestyle to worry over what we had gone and done; packing up all our worldly goods and selling our beautiful beachside home, leaving all our family and friends behind to go heading out in the wide blue yonder on board a nine year-old 14-metre catamaran we’ never laid eyes on before.

But our fears evaporated the moment we stepped aboard S.V. Ruby Blue. She was more beautiful (and somehow even bigger) in real life. And instantly, we both felt right at home. 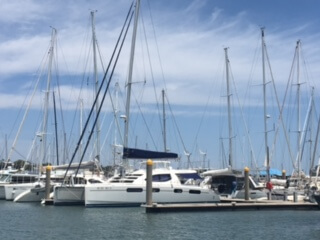 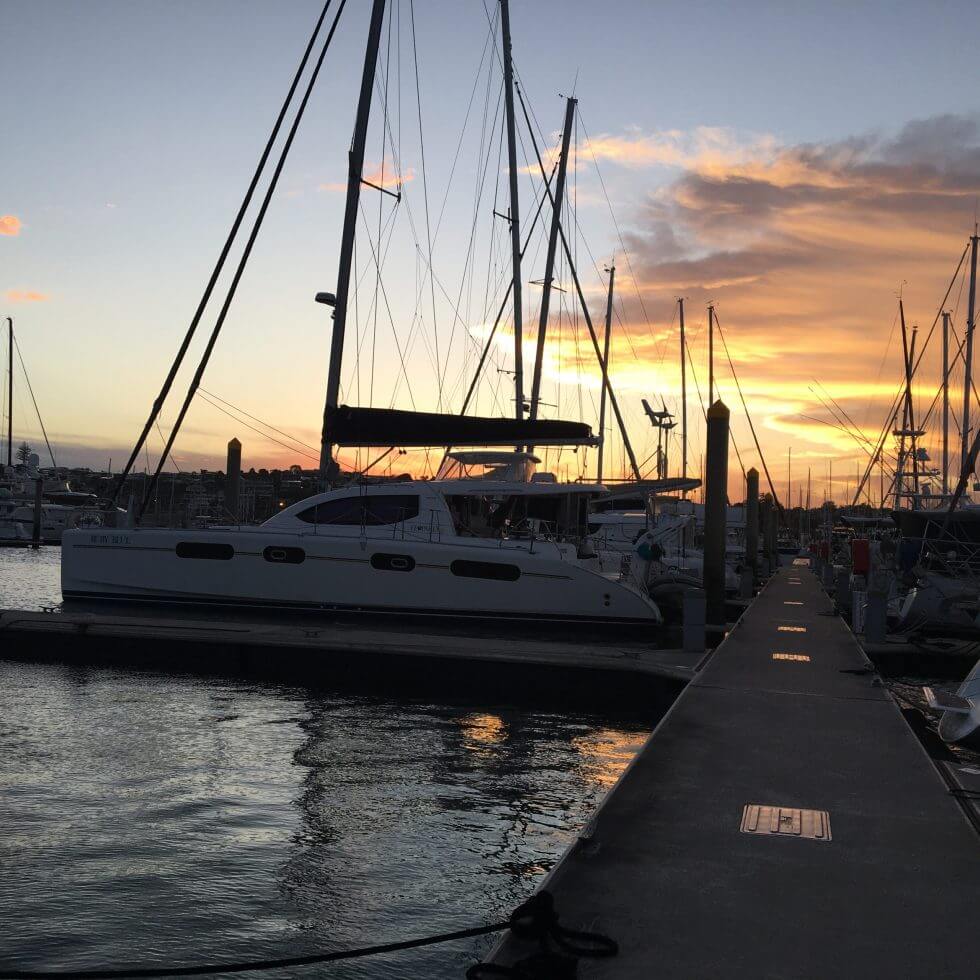 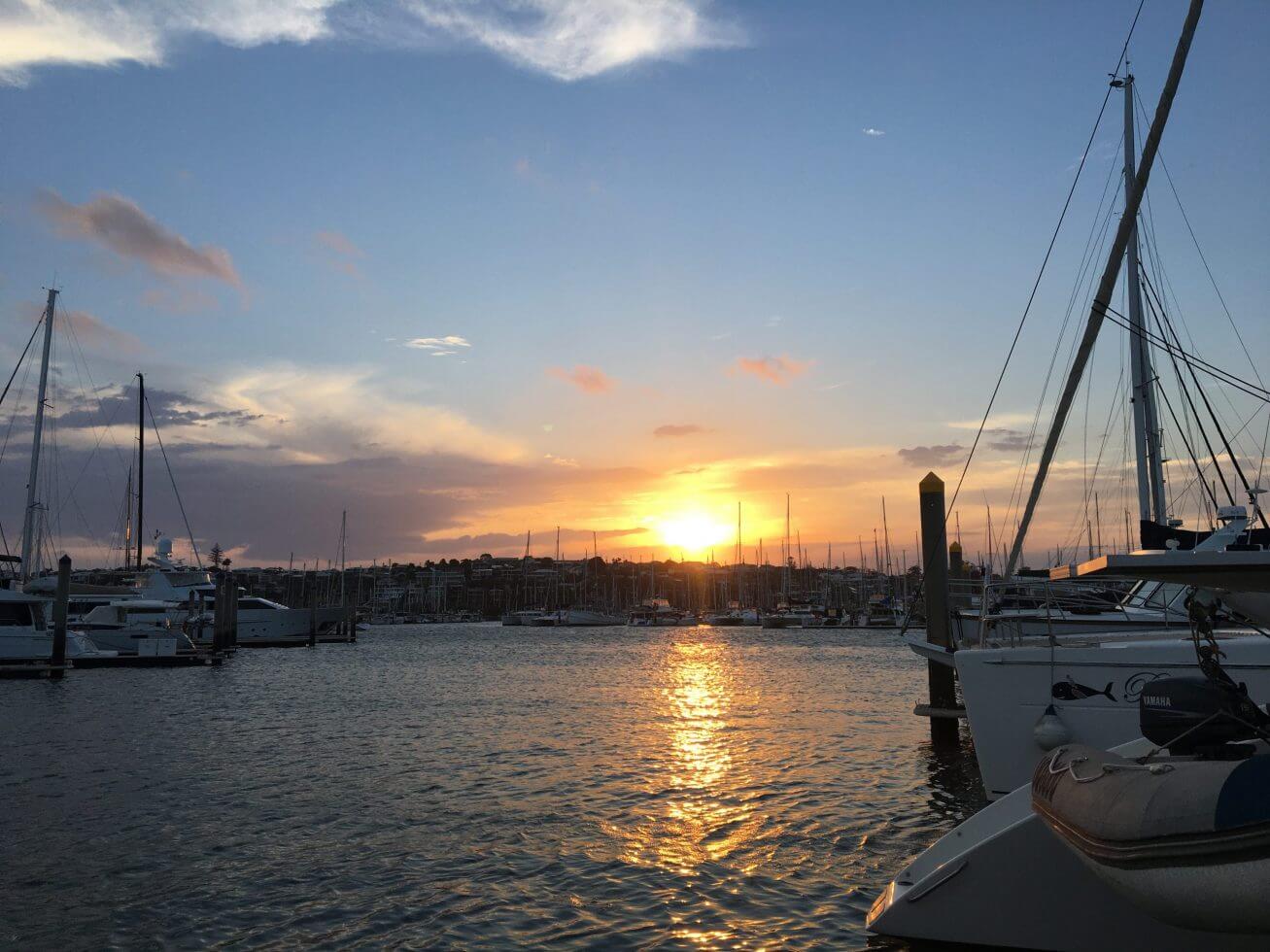 While the Skipper bounced about the boat exclaiming over the various technical equipment, I immediately set about checking the cabins and cupboards to see what the previous owners had left behind. ?Luckily for us, they live in New Zealand and hadn’t been able to get back to collect anything. At first glance, it appeared we had bought a boat full of quality kitchenware, linen and appliances.

Although, a thorough inspection did reveal a few choice items that would likely receive?the old heave-ho treatment.

The first of these is this glorious engraved pine sign, complete with stylish bevelled edging. Despite the wording, I feel fairly sure it’s been mass produced and holds no indigenous cultural value. ?It’s also been cleverly attached above the door with a couple of old roofing screws, not only adding that distinctive homestyle touch but also making its removal and repair a tad more difficult. Luckily, our skipper loves a to-do list! 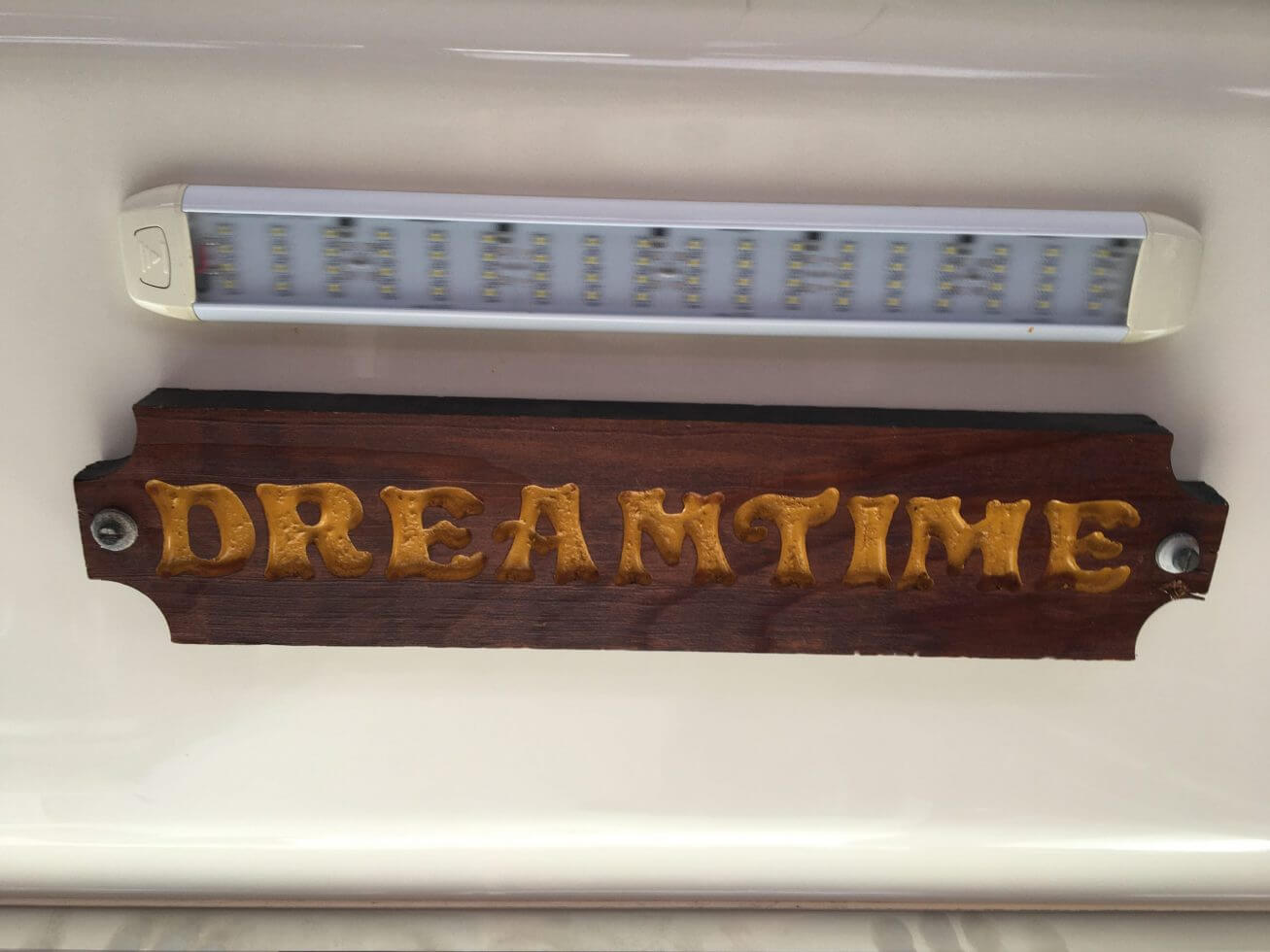 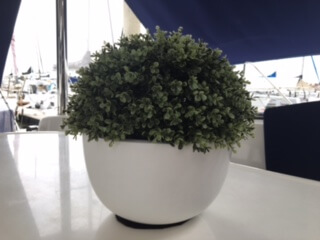 Then there’s this, the biggest plastic fern ever invented,?adorning the salon (a nautical term for the internal living area) in a nod to classic Women?s Weekly styling.

But the pi?ce de r?sistance would have to go to the?frayed puce pink cushion emblazoned in metallic gold lettering with, you guessed it, a dreaded lifestyle quote. Suffice to say that from here on in, this fine and fancy item will be making its days count on a dusty shelf in a nearby op-shop until hell freezes over (or at least until some kid splurges his hard-earned pocket money on a crappy Mothers’ Day gift). Well, it?s the thought that counts. Right?

Meanwhile, the Skipper seemed to think it was more important to take in Ruby Blue?s nautical and mechanical features being displayed by our hard-working broker, David and his good buddy Wayne-O, as we motored out of the marina to sail around Green Island and back.

Although, how much advice one should take from an unshaven guy called Wayne-O, decked out in a pair of faded hip-hugging stubbies complete with overhanging tummy barely covered by a ragged Hawaiian shirt, remains to be seen. However, our Skipper seemed to think he was a ?great bloke?, (which usually translates to full of it, in my vast experience) and sealed the deal by sharing a cold brew with the guys once we were on our way back to the marina. 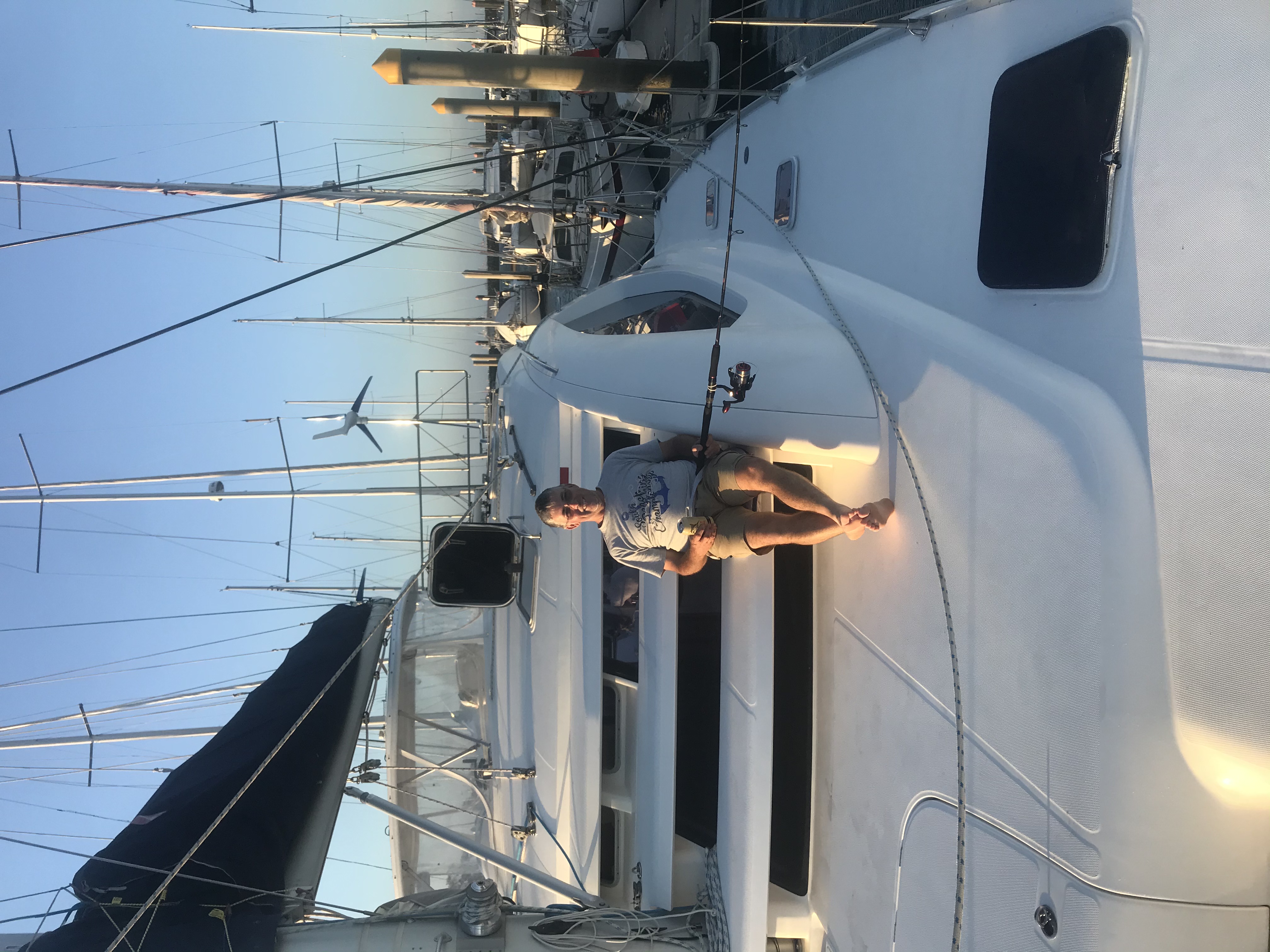 Since then, we?ve spent the last few days unpacking, de-cluttering, cleaning and stocking up on essentials, (including two new fishing rods and of course, more of those flouro plastic fishy jigs).

Each day in every hatch, hollow and hidey-hole to his sheer and utter delight, the Skipper excitedly discovers more ropes, tools, cleaning equipment, spare parts and product manuals than the local chandlery, but he doesn?t let that stop him from dropping in to browse their shelves making a massive mental wish list of the many items his heart still desires.

We?ve also explored the vibrant caf?-filled beachside suburbs of Manly, Wynnum and Cleveland (we were really checking out all the Marine chandlers and looking for BCF). Although, I did manage to taste-test the Brisbane version of a skinny flat white, check out quite a few op-shops and chance upon a rather excellent indie bookstore,?madhattersbookshop within walking distance of the marina. I can see this will require further thorough investigation, probably over several visits. Without the Skipper!

The adjoining club, RQYS is chock-full of vibrant activity. They have weekday junior sailing programs, club racing on Wednesdays and Saturdays, WineDown cruising on a Friday arvo and many more social activities. The clubhouse itself boasts a bistro, caf? and an ? la carte restaurant. This weekend Santa paid a visit to the Kids Christmas Party and an elegant 30th birthday party was set up on the lawns. We?re surrounded by lovely live-aboard neighbours and looking forward to meeting more. 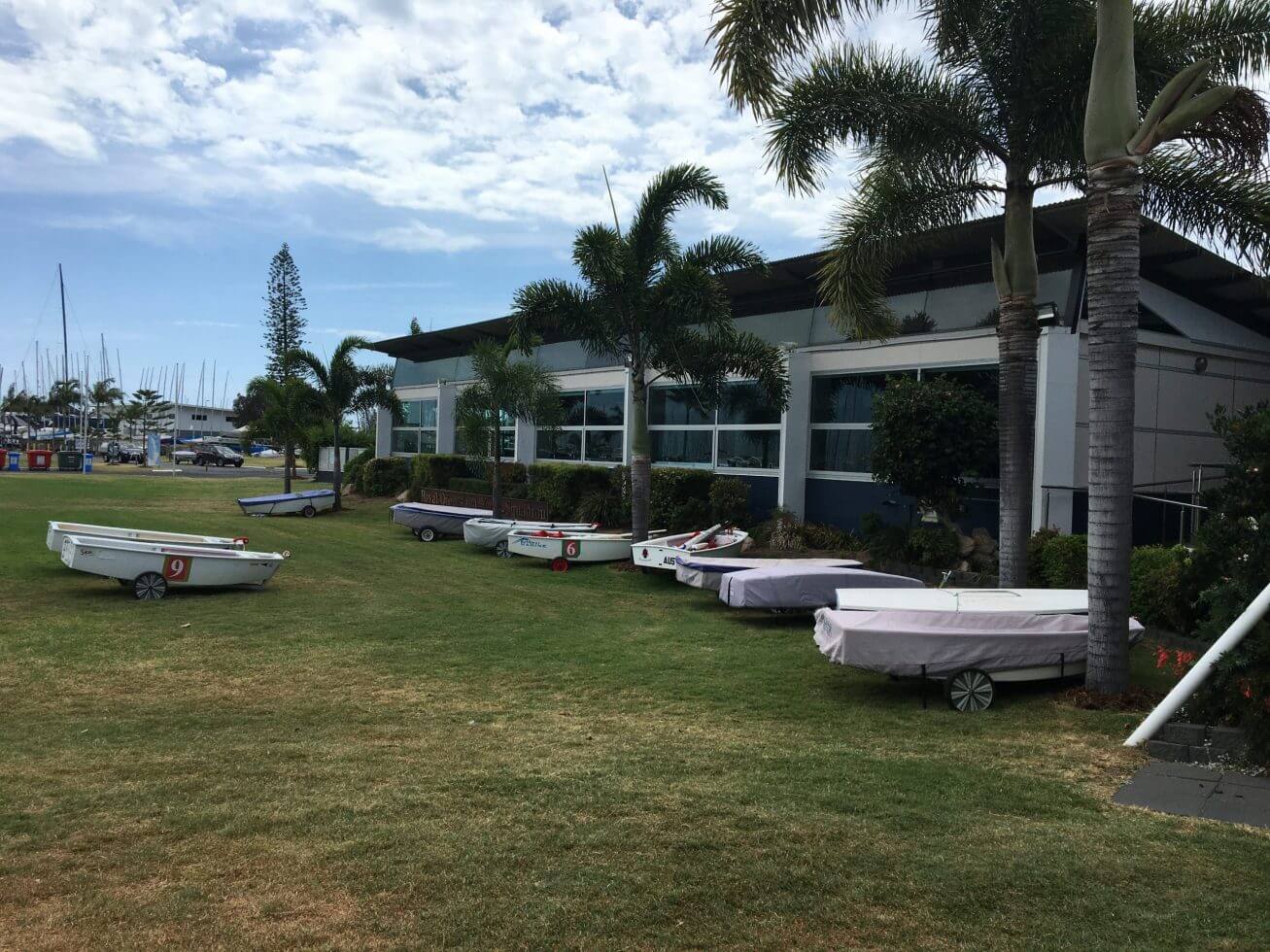 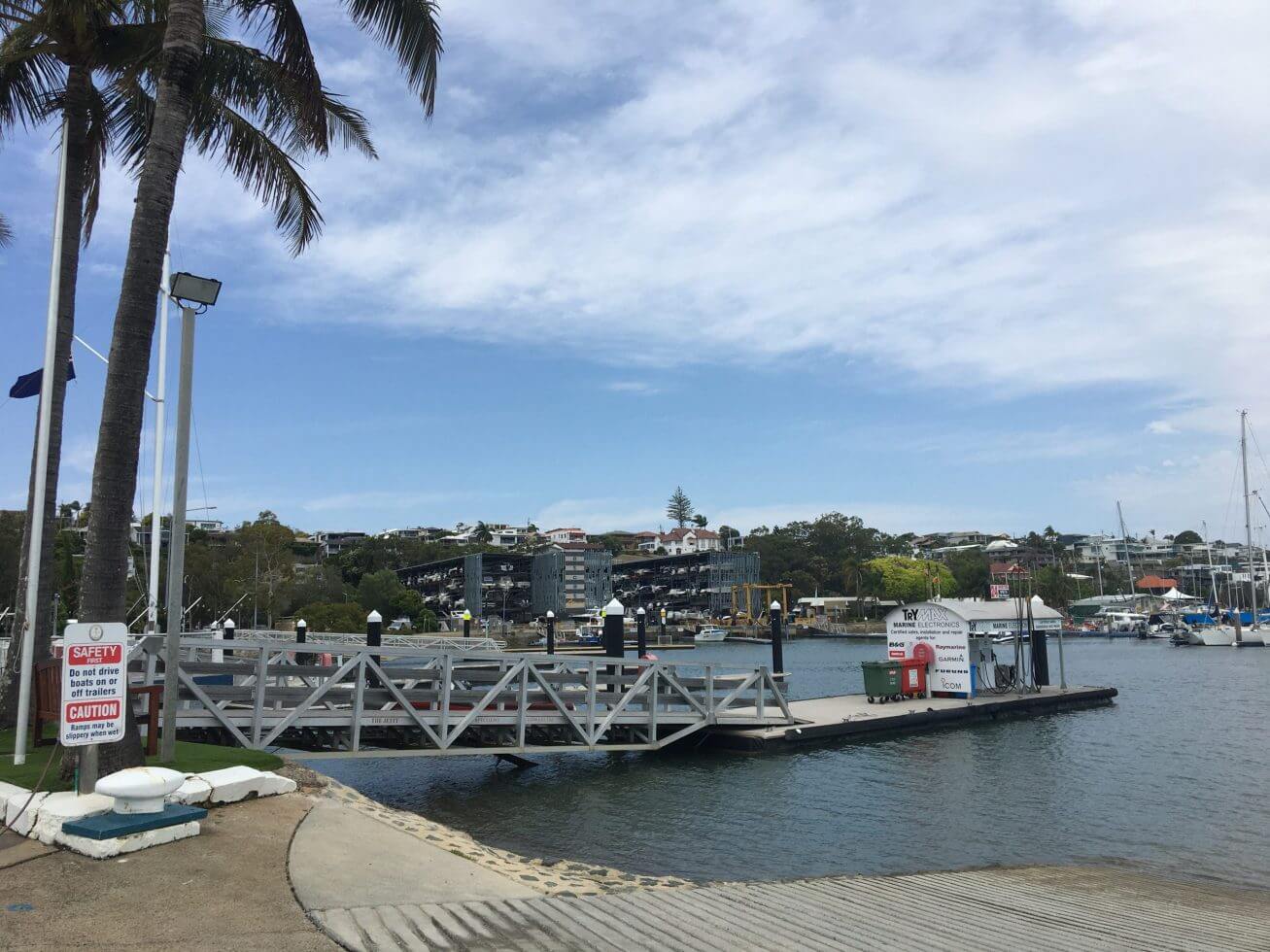 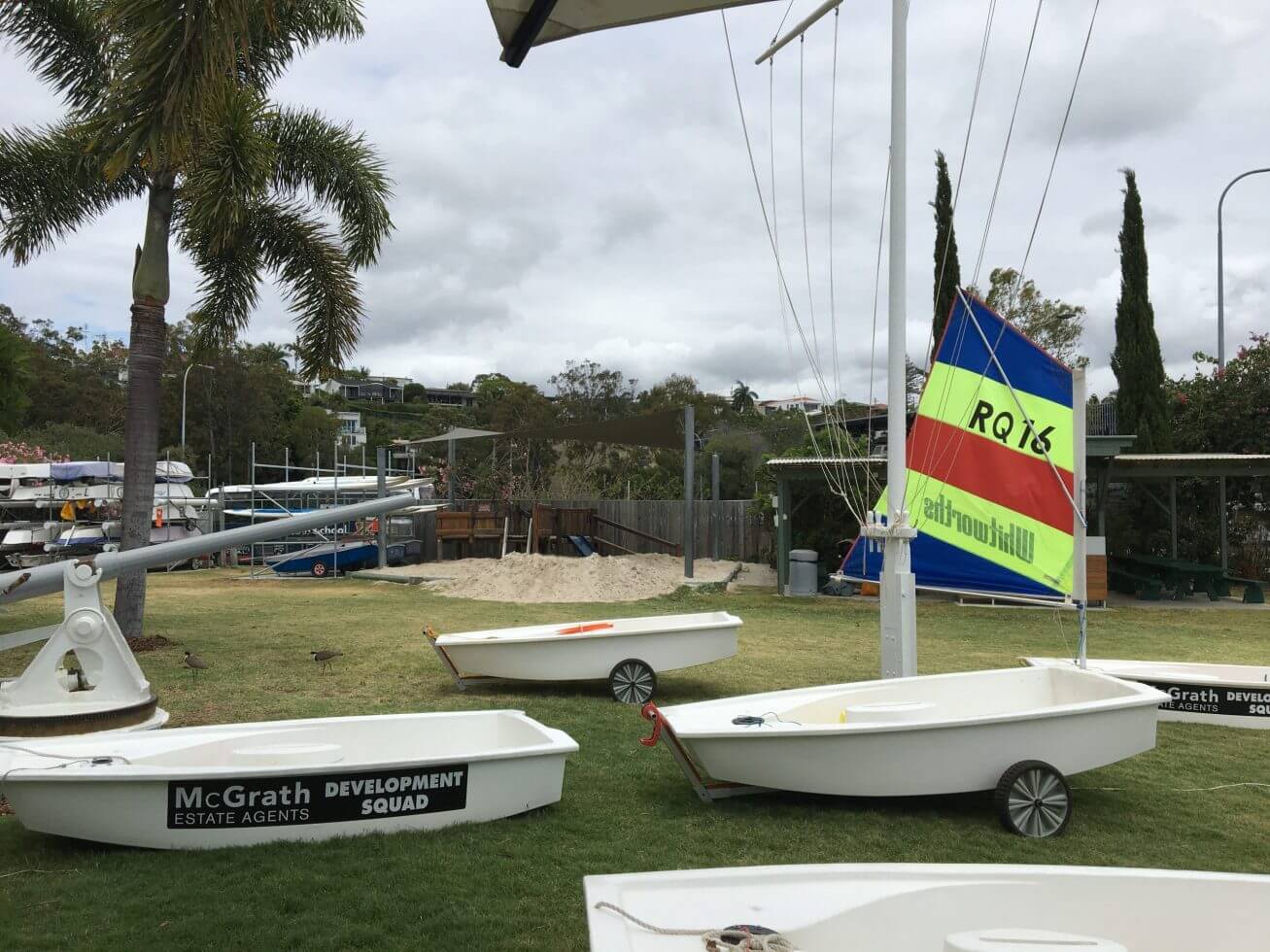 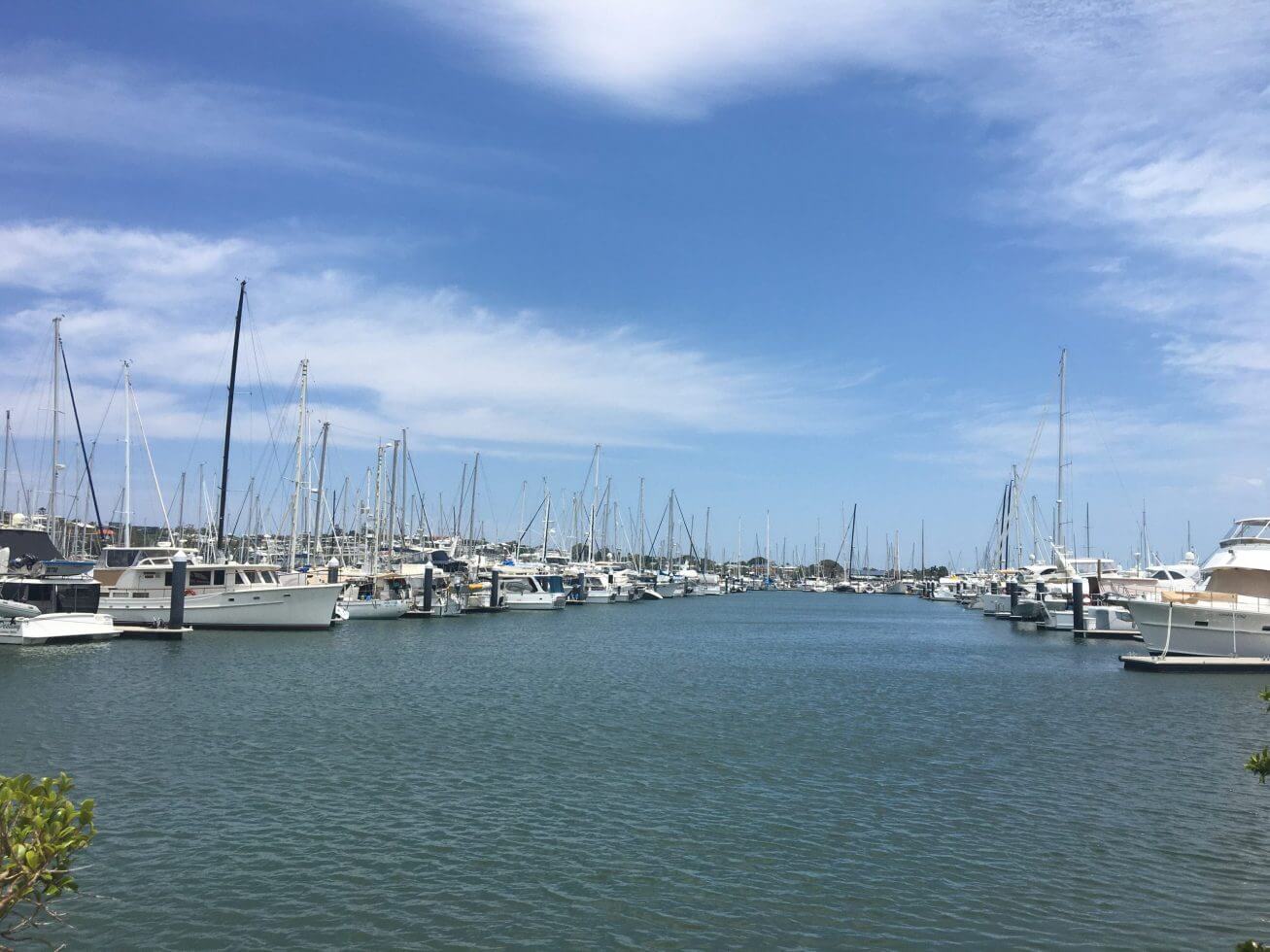 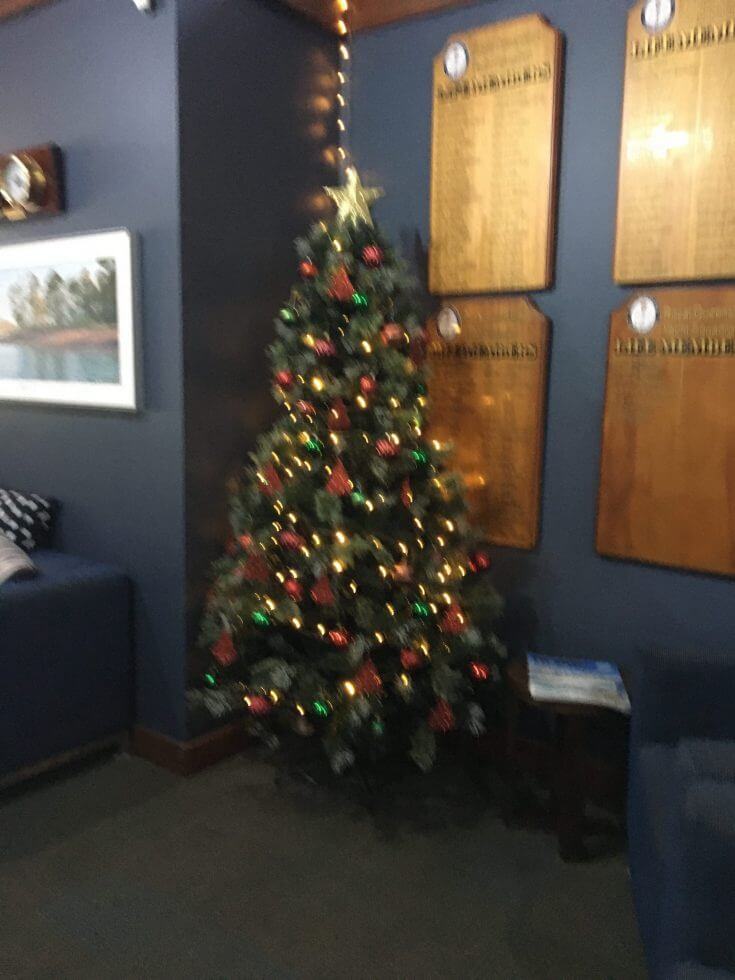 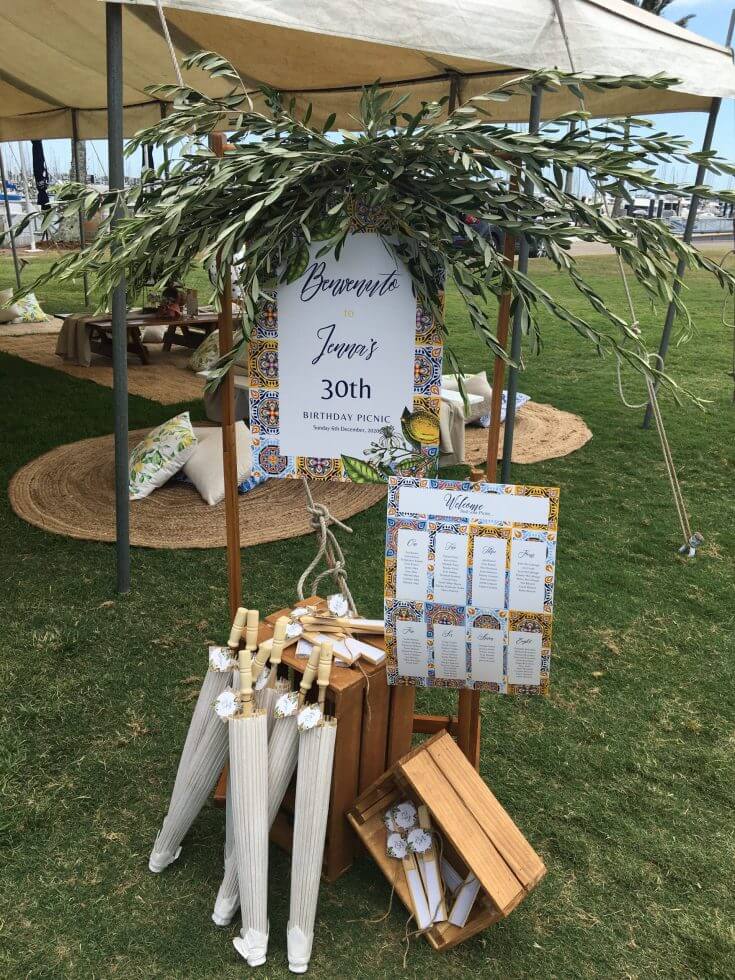 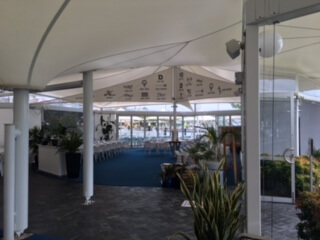 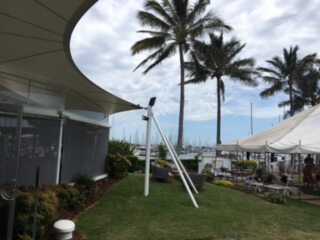 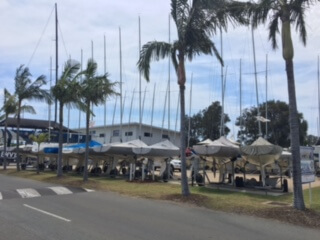 Hopefully, my next post will include some actual sailing adventures but until then I?ll sign off with a lifestyle quote in a nautical theme from another of our inherited decorative cushions:

?Home Is Where You Drop Your Anchor?

Awesome guys looks like the life! Enjoy it, can?t wait to make the visit up there and enjoy it with you xx

OMG
you daredevil I can?t believe it
Are you gone for good??
I wanted to catch up

Nah, we?ll be back girlie, Will give you a call ? We?re also taking bookings on board!

Congratulations and best of luck for a lifetime of happiness . Glade you and Ian will be living the dream x

Got your cabin ready Mrs Hyde?