We parked on the main drag in Katherine late on a Friday arvo. It was bustlingly busy with shoppers, schoolkids, seniors and the usual scattering of scallywags. The driver was off on a mission to pick up his new propeller so I took the opportunity to do a bit of Ian-less shopping.

But as I happily bounded down from Bounce, I happened to smile at a pair of locals. I guess they’d been a few days out bush and were in need of ?a chinwag?- and a wash. Luckily, I was standing up-wind! The old fella asked how we were enjoying our travels in the Territory and his weather-beaten face lit up displaying a gummy grin as I spoke of our adventures.

He told me his country was ?out there Oenpelli? and beamed again when I commented on the beauty of the area but the old woman?s wrinkled face remained blank. He patted her on the head and said his wife was called Annie. She giggled behind her hand as he explained her people were from Arnhem Land. They?d heard that a whitefella had recently been taken by a crocodile at Cahill?s Crossing and wanted to know if I?d witnessed the attack. 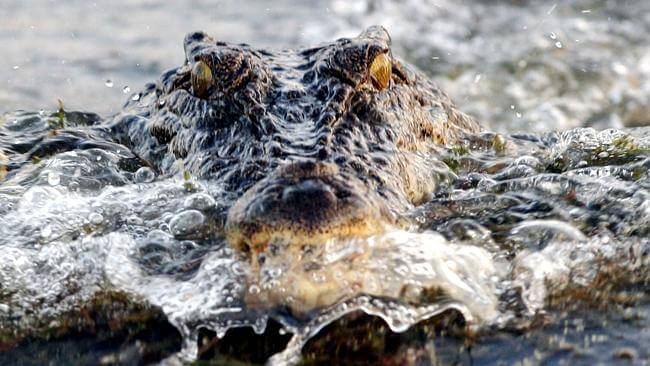 Luckily, I?d missed that particular performance but said we?d heard the unfortunate fisherman had simply been leaning over the back of his tinny to wash out a bucket. At this news, old mate began to mutter, click and make snapping hand gestures to his wife.

Suddenly her dark sunken eyes grew wide and raising her stick-like arms in the air, she began to wail, ?Nooo, you don?t know him alligator!? Her husband tried to calm her down but she would not be stopped. Then, as he tried to drag her away she pointed a bony finger accusingly at me, ?Alligator, him da boss. Y’know?.

Well, I never, not in all my born days (as my dear old Nan would?ve said)! It was quite a confrontation. And, it had taken place right in front of KFC – crowds of locals gathered for their daily serve of ?bush tucker? ? but nobody even batted an eyelid!

I went on my way keeping my eyes firmly focused on the footpath determined not to make any further eye contact. However, upon my return the driver asked me how I had enjoyed my chat with my new pals. Apparently, he?d been sitting snugly in the car enjoying the entertainment!!

To make up for this and various other bad behaviours, I decided the driver owed me a Devonshire Tea. We drove on through the ever-increasing beauty of the Gregory National Park awed by the striped escarpments of its mountain ranges and intrigued by the human-like boab trees scattered across the lowlands before we spotted a suitable caf? at the cute little town of Timber Creek.

This tiny place now consisting of just the pub, caf?, roadhouse and two caravan parks had once been a hive of activity. It was a barge loading point on the Victoria River for drovers and crocodile hunters in the top end. Some of the biggest crocs ever were caught around these parts in the good old days. And as we discovered when we put the boat in later that day, they?re still ?ere and must have gobbled up all the fish.

The next morning dawned with a thick mist that cleared as soon as the wind sprung up. But when we got to the boat ramp there were so many white caps hurtling across the mighty river it could almost be mistaken for Bass Strait on Boxing Day. The driver decided against further fishing expeditions.

Breathing a sigh of relief, I spent the rest of the morning trying to get a photo of a baby eagle I?d spotted in one of the intricately shaped boab trees nearby but ended up snapping this blue-winged kookaburra instead!

Meanwhile the driver watched an elderly couple busily concealing bags of potatoes, carrots, apples and birdseed inside their rusty pop-top caravan. Later, as we were waved on through the border inspection point we saw a ?pot-bellied official in hi-vis gleefully toss the oldie?s hidden contraband into the bin.

We?d officially entered The Kimberley region of Western Australia and crossed over our third state border since we began bouncing along.

At this rate, we should be home by Christmas!