My dearest followers, I must apologise profusely for my tardiness in regularly updating this blog.

I do hope you will find it in your hearts to forgive me…I?ve been almost tearing my hair out trying to cope with the limited facilities of the outback that upon reaching the relative civilisation of Broome I find I?m almost bald – okay, that’s a slight exaggeration, but then I did get my haircut just before we got here!

Thankfully this Bouncing Blog is now bought to you via the ?Wizard of Oz? (aka Telstra 4G pocket wi-fi) and I’ll attempt to bring you up to speed with our travels faster than the Road Runner being chased by that Wily Coyote.

After Kakadu, we camped on the banks of the Mary River. This wide stretch of calm brown water runs through some of the biggest and wealthiest cattle stations in the land. It looked so inviting glistening wetly in the hazy afternoon heat that I felt tempted to jump in for a swim. The driver thought its glass-like surface was just begging him to hook up the boat and carve a slalom ski across the top.

Neither of us could indulge our passions due to the over-abundance of hungry crocs inhabiting the area. I had to settle for a dip in the park?s clear blue swimming pool while the driver took his fishing rods out for a ride on the boat. Unfortunately, no edible fish were caught so after a couple of relaxing shady days we moved onto Corroboree Billabong.

This enormous palm-fringed waterhole made up of several lagoons with huge islands of lily pads and pandanus was just teeming with wildlife. Although they forgot to put any fish in the water! However, Baby Bounce and I thought it was worth enduring the fisherman?s curses and the blistering heat of the day just to spot all the different birds, butterflies, insects, animals and reptiles. 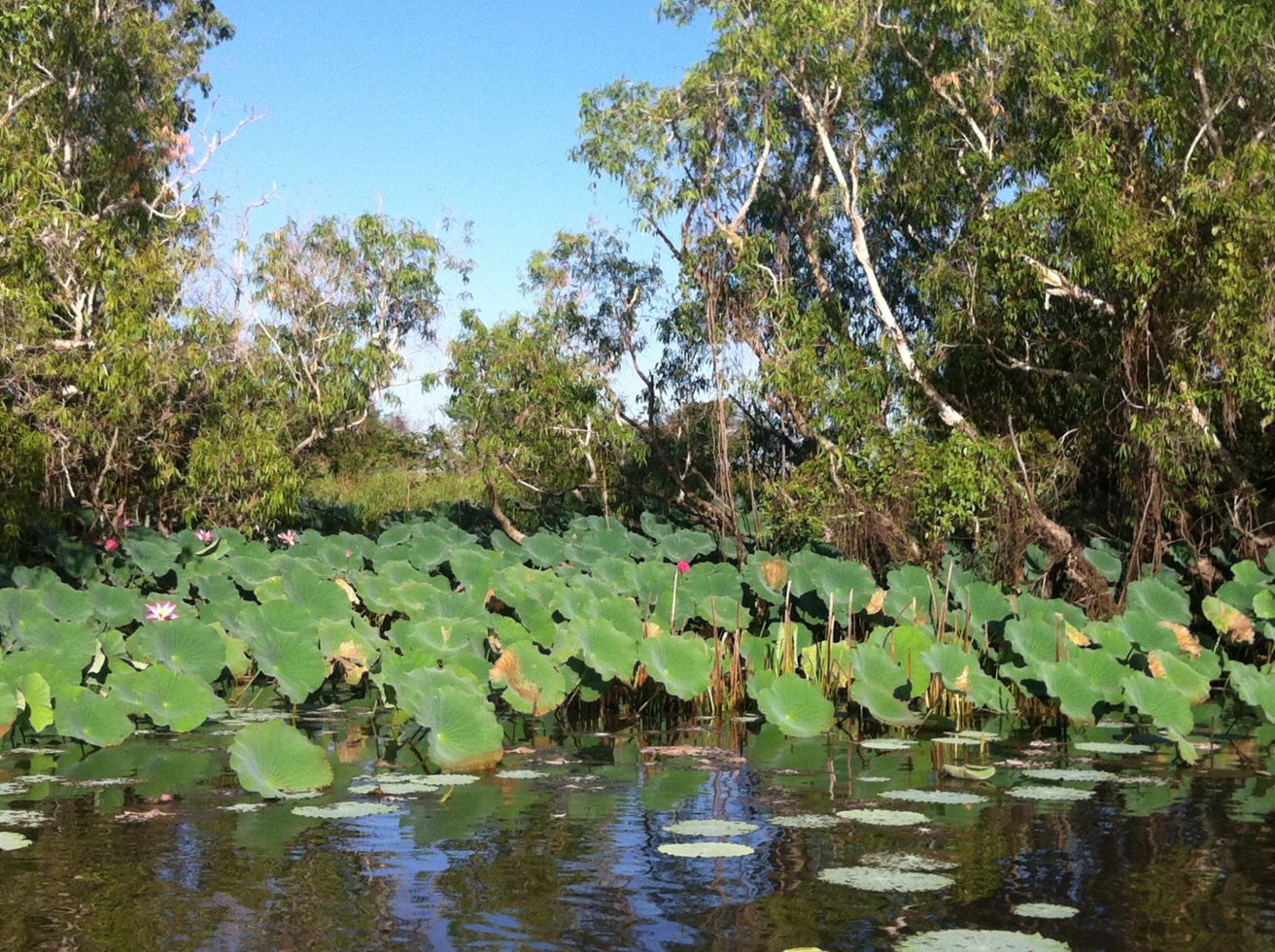 Also, it meant I could escape the feral humans back at the campsite. We were surrounded by Darwin-ites escaping the city for the weekend.

There were dodgy old blokes staring through a haze of tobacco from their tarp humpies and groups of workers in hi-vis and boots catching up on a shifts worth of drinking and swearing while kiddies ran riot from playground to pool screeching and crying.Their mothers were flat out yelling at them between drawing deeply on ciggies and glugging back tinnies saying ‘I know, I know’.

The driver thought I was being a snob until later one seedy looking pair (a male and a female of this local bogan species) emerged from the dilapidated ladies toilet block. Dripping wet and partly wrapped in a small bath towel, they staggered back to their wonky tent full of sleeping offspring. There’s really only one word for that sort -?Noice!

We drove onto Darwin, not quite sure what to expect after that ?- but we were pleasantly surprised.

The driver was eager to check out all the WWII memorabilia so we spent a sweltering week touring through the streets on our trusty scooter taking in all the sights and sounds of the city. One afternoon, it must’ve been 44 in the shade (if there actually was any!) we were scooting along the highway when we ran out of petrol. ?The driver wheeled the bike to the nearest petrol station while I trudged a long way behind, dripping in sweat. By the time I reached the fuel pump my face felt like it was on fire. 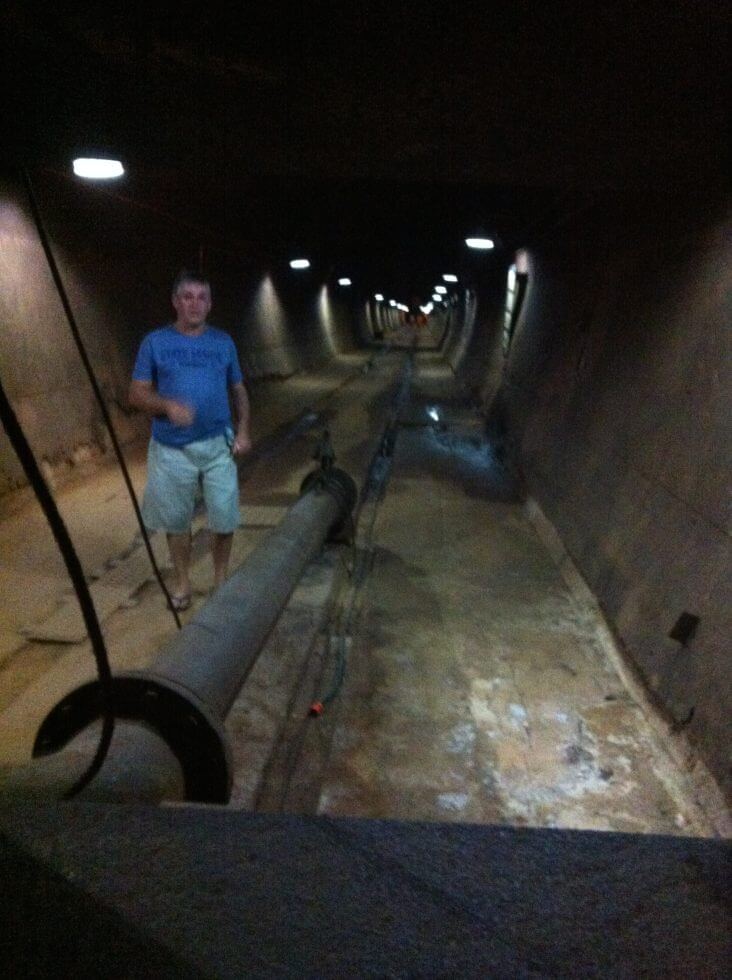 I must’ve really looked like I needed rescuing as an old blackfella held out his hand to pull me up onto the footpath.?I declined his filthy scabby mitt but thanked him for the offer anyway. He then took the opportunity to say, ‘Me very thirsty, you got spare change me buy drink?’

In this fair city of contrasts, we did enjoy some relaxed alfresco meals on the waterfront, the outdoor cinema, the night markets and the trailer-boat club.?But the highlight for me was a sunset-cruise of the harbour on board the restored schooner ?Adieu? where we feasted on local seafood as we toasted the unending view.

Glad you liked Darwin. I was pleasantly surprised when I went there. Need to take Kev now. You’re meeting some interesting people anyway! 😀

Hi Danielle & Ian, We love your writing Danielle, brings back alot of memories of places we have been too. We loved Darwin too. Ron loved your photos of Daly Waters, Ron went through there with a friend on their way to Darwin. He also wants to know if you have come across the Belgium ex Uni Professor with the camels. Keep up the great writing, enjoy. Joan & Ron

Hi Joan there’s plenty of weirdos up here, we met a scottish guy riding a bike with a toy camel strapped to the front and some backpackers that thought it would be easy to hitch a ride from Darwin to Melbourne but no professors – yet!