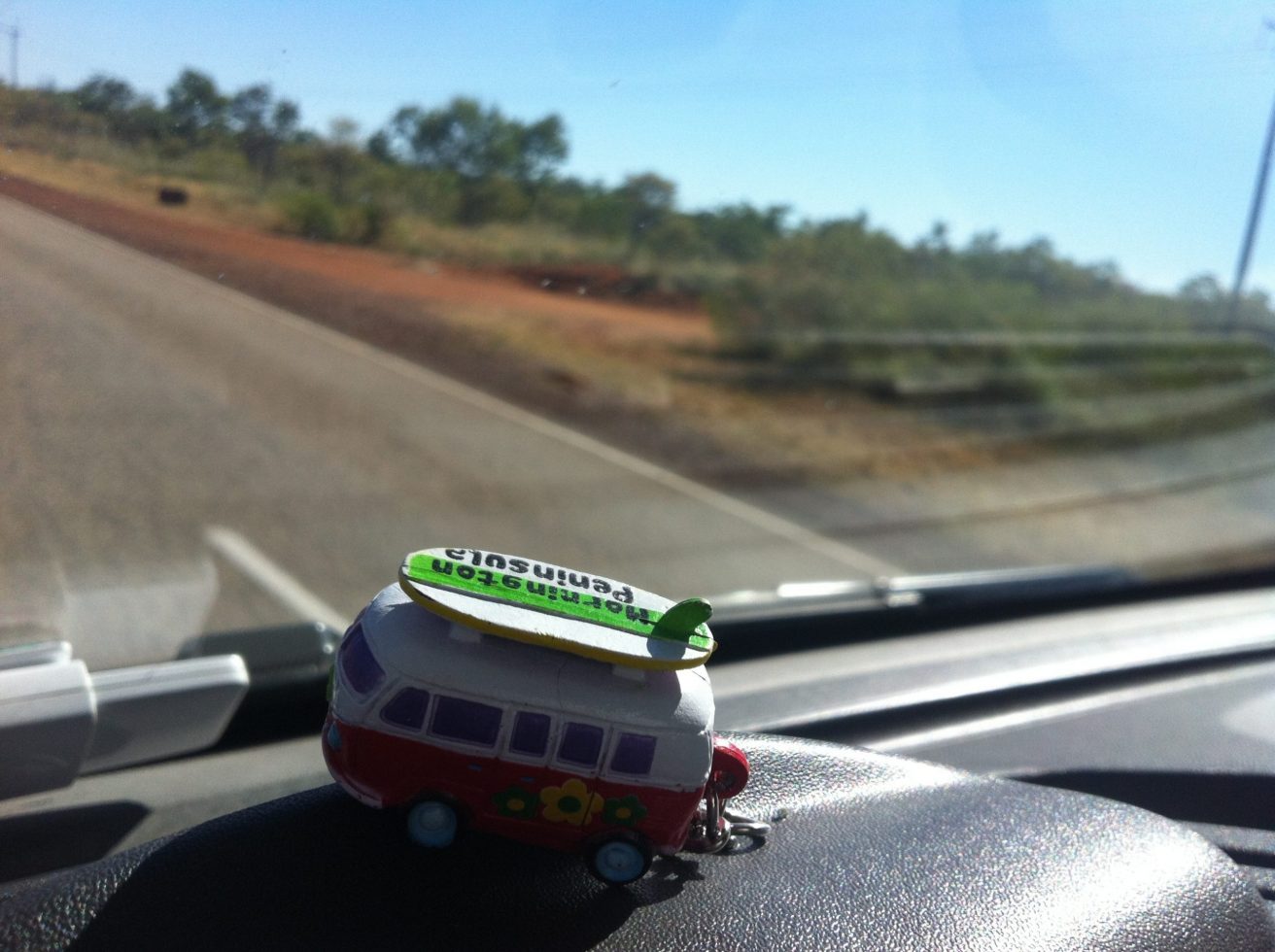 Driving, driving and more driving ? Accompanied by roaring roadtrains, army trucks, mining vehicles, 4WD?s with camper trailers, caravanners of all different makes and models and a scattering of fellow motorhomers we cruised along this piece of bitumen running from one end of the country to the other called the Stuart Highway.

All along, watching us like silent sentinels, stand the red anthills. Sometimes they are spread uniformly across flat paddocks of dry grasses laid out like a lawn cemetery. Others are huddled together like families, consisting of two taller towers surrounded by a scattering of different shaped smaller mounds.

One group were even lined up at the verge, from tallest to smallest like school kids waiting for the bus. There were some that had rounded peaks like heads or broader sides like shoulders. Quite a few of these had been rather snazzily attired in faded t-shirts, dresses or hats.

These stone people instantly captivated my imagination. As we cruised past I create backstories and personalities for them all. I?m itching to stop and get some photos too – but I don?t dare suggest such a frivolous waste of travelling time!

Then, when a shady roadside stop looms up ahead I?m astounded that the driver suggests we pull in for a coffee break. This is so out of character for him. In the old days, even when there were three screaming kids and two dogs on board, we all had to harp and plead for him to pull over.

Although, he quickly gave his game away when he jumped out to ?have-a-chat? while the kettle was still boiling. He met up with two friendly couples from out near Dubbo who were following almost the same route as us. While Ian discovers that both Danny and Brian are keen fishermen, I get talking to their bubbly wives, Wendy and Julie. It turns out their menfolk are more than happy to stop for photos as they have both been banned from smoking in their vehicles so are always on the lookout for their next smoko break.?We travelled in comfortable convoy together for the next few days passing across the Tropic of Capricorn and on through the infamous Barrow Creek.

We stop for smoko at Wycliffe Well. This sleepy little all in one caravan park/tavern/petrol station/cafe has achieved international fame for the number of recorded UFO sightings. However, upon closer inspection it seems most of the extra terrestrial activity has been reported either by the owner or his extended family and friends!

The next stop for our little convoy was the Devils Marbles or ?Karlu Karlu? as the locals call this mass of enormous oval and spherical boulders. Whatever they?re called, they certainly do look like they?ve been tossed haphazardly across this flattened land by an unseen giant hand. Some huge stones have split while others hang precariously as if about to topple and break apart at any moment.

There?s a powerful sense of magic in the air again, so I?m not surprised to hear that it?s long been an important aboriginal meeting place. The ranger guide tells us the story of an elderly indigenous man who remembered having been lost out here as a toddler. 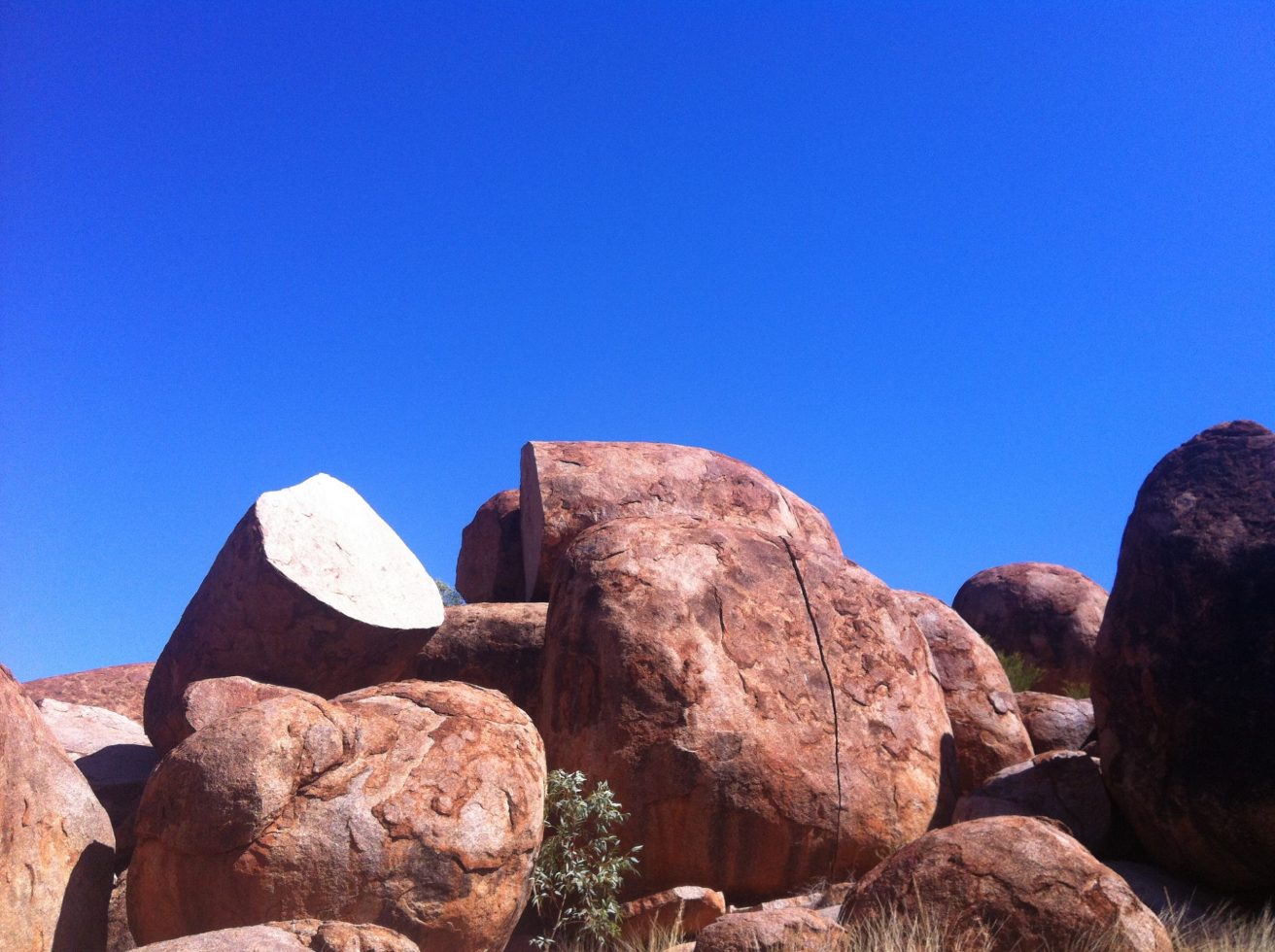 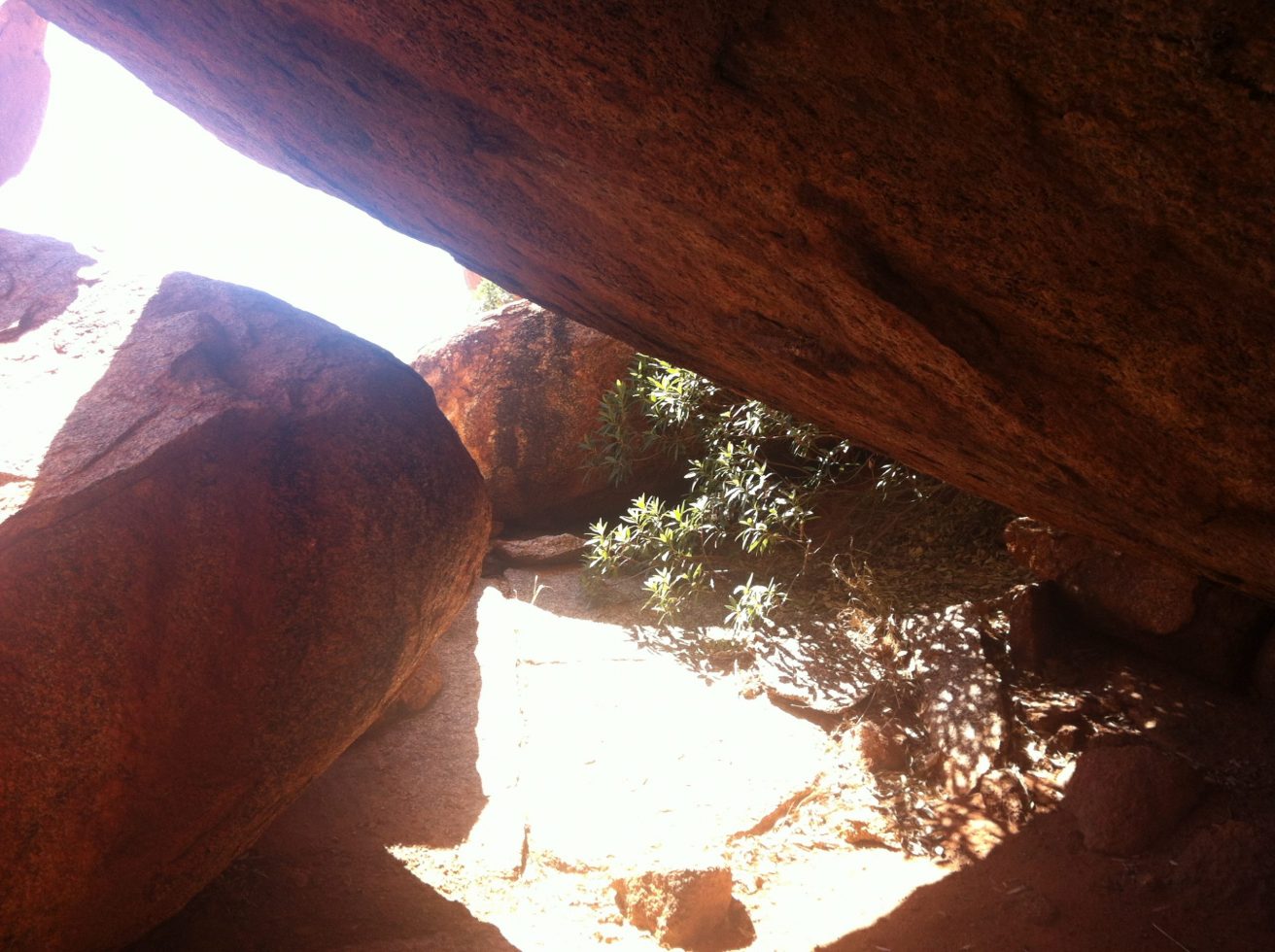 His mother told him he?d been happily playing with some children she hadn?t recognised all afternoon. But when it was time for his family to leave they couldn?t find him anywhere. His elders believed that the ?Dreaming People? had taken him so they had used some special magic to bring him back, but now that?s all lost.

We left our new friends to camp there amongst the ghosts of stolen children as we headed off to our next destination, the Banka Banka cattle station.

In the lead up to this trip some people (not me!) spent hours crashing and banging around in the shed while others (ie. me!) did the researching. This included the re-reading of a few classic outback novels. Amongst these were titles such as ?We of the never-never? by Jeannie Gunn, ?Kings in Grass Castles? by Mary Durack and ?Hell, West & Crooked? by Tom Cole.

Tom Cole was one of those legendary all round outback heroes. His many and varied occupations across the top end during the 20?s & 30?s included that of drover, cook, ringer, stockman and horse-breaker as well as a famous buffalo and crocodile hunter.

Banka Banka, the outback and its hard-working, hard-drinking pioneer cattlemen had been bought to life for me through Tom?s tall tales. So I was delighted to learn that we could stay at this still working cattle station as a small section of this enormous land holding had long since been converted into a caravan park. 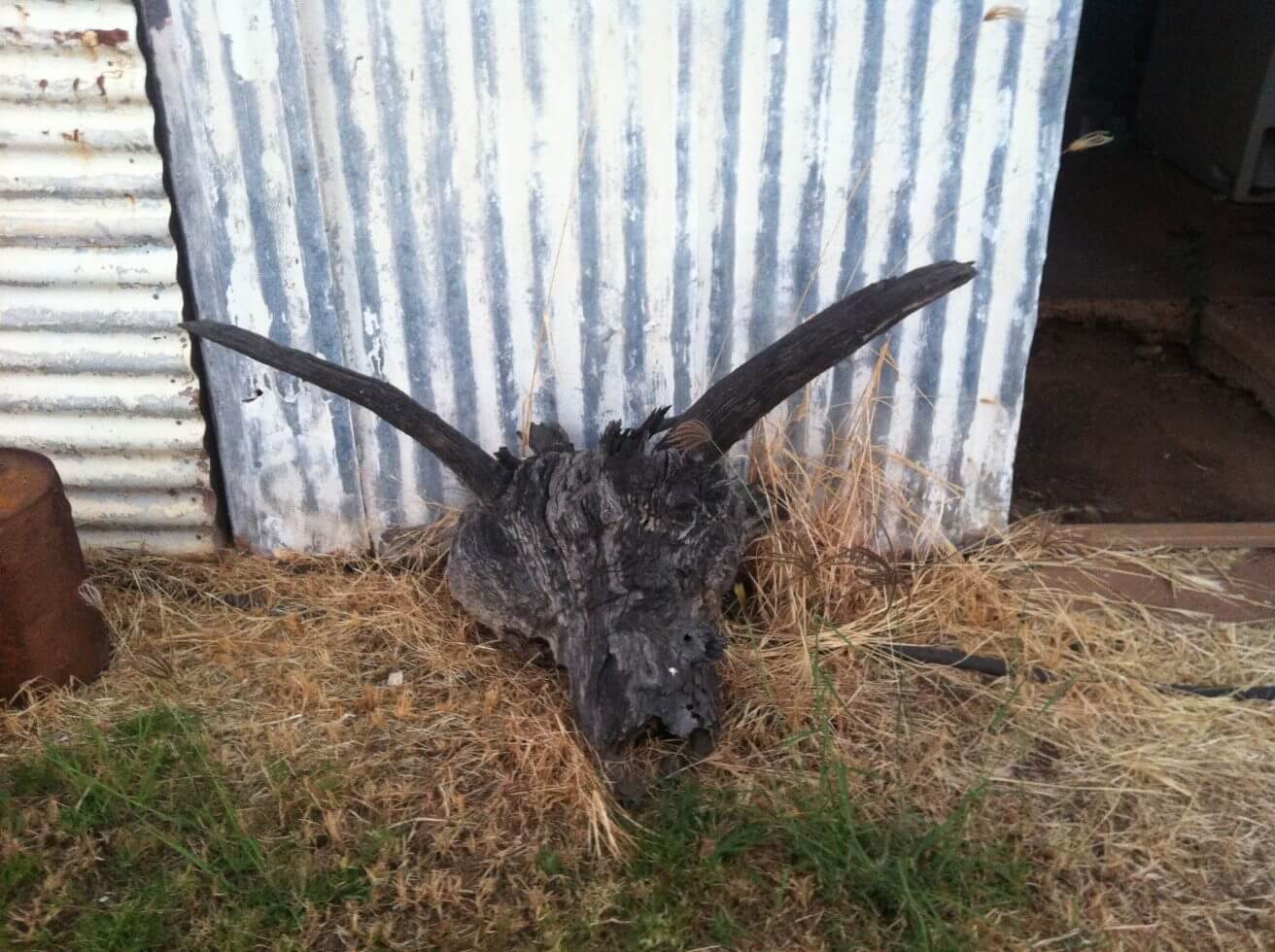 The original three-roomed homestead built of anthill mud-bricks is still standing but now serves as a bar and kiosk for the campers and the station hands nightly campfire. We spent an interesting night around the fire swapping stories with other travellers and listening to the head stockman and the camp manager discuss their recent cattle muster.

The driver eventually came to bed muttering about getting up at 4am to watch the poor beasts get loaded onto the roadtrain. The stench of steaming cow dung combined with his phone alarm jangling loudly woke me at that ungodly hour but the driver snored right through it all.

When he finally did surface, it was decided we?d take a bit of a look around the place before we hit the road again. We set off about 8.30 am hoping to beat the heat of the day. A hand painted sign that read ?Waterhole – 2km? led us along a sandy track that seemed to follow the highway for at least 4 km before finally turning inland. This smaller track was quickly swallowed by a tangle of lush greenery. We picked our way through until a welcome blast of cool air and a flapping flock of wild ducks signalled that we had arrived at the waterhole. 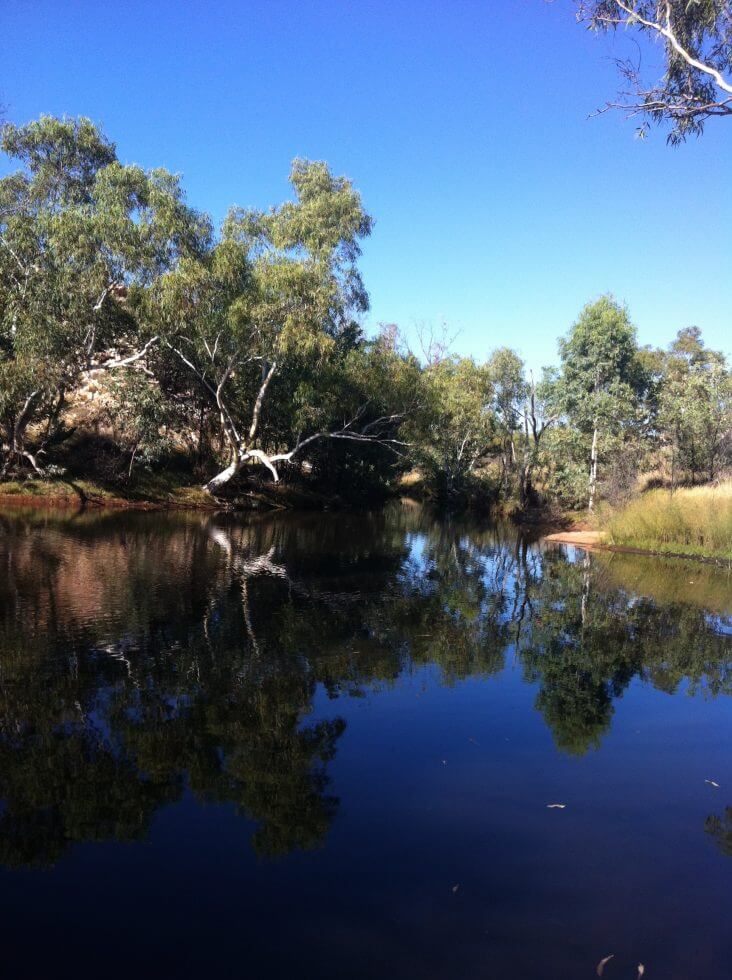 ?It was quite a stunning sight, sheer limestone cliffs reflected across the deep dark glassy pool to a thick bank of tall trees and lush green undergrowth. Rather than retrace our steps, the driver suggested we follow the rocky outcrop. I began to doubt his orienteering skills as we climbed up and over the steep ridge. He coaxed me on saying he could hear the sound of trickling water. Eventually we came upon a crystal clear spring fed creek chock full of tiny fish.

By the time we made it back to the camp it was almost lunchtime. I was a complete wreck, sweating, shivering and verging on sunstroke.

Never again will I follow a handwritten sign or a stubborn little fella with a wonky sense of direction!