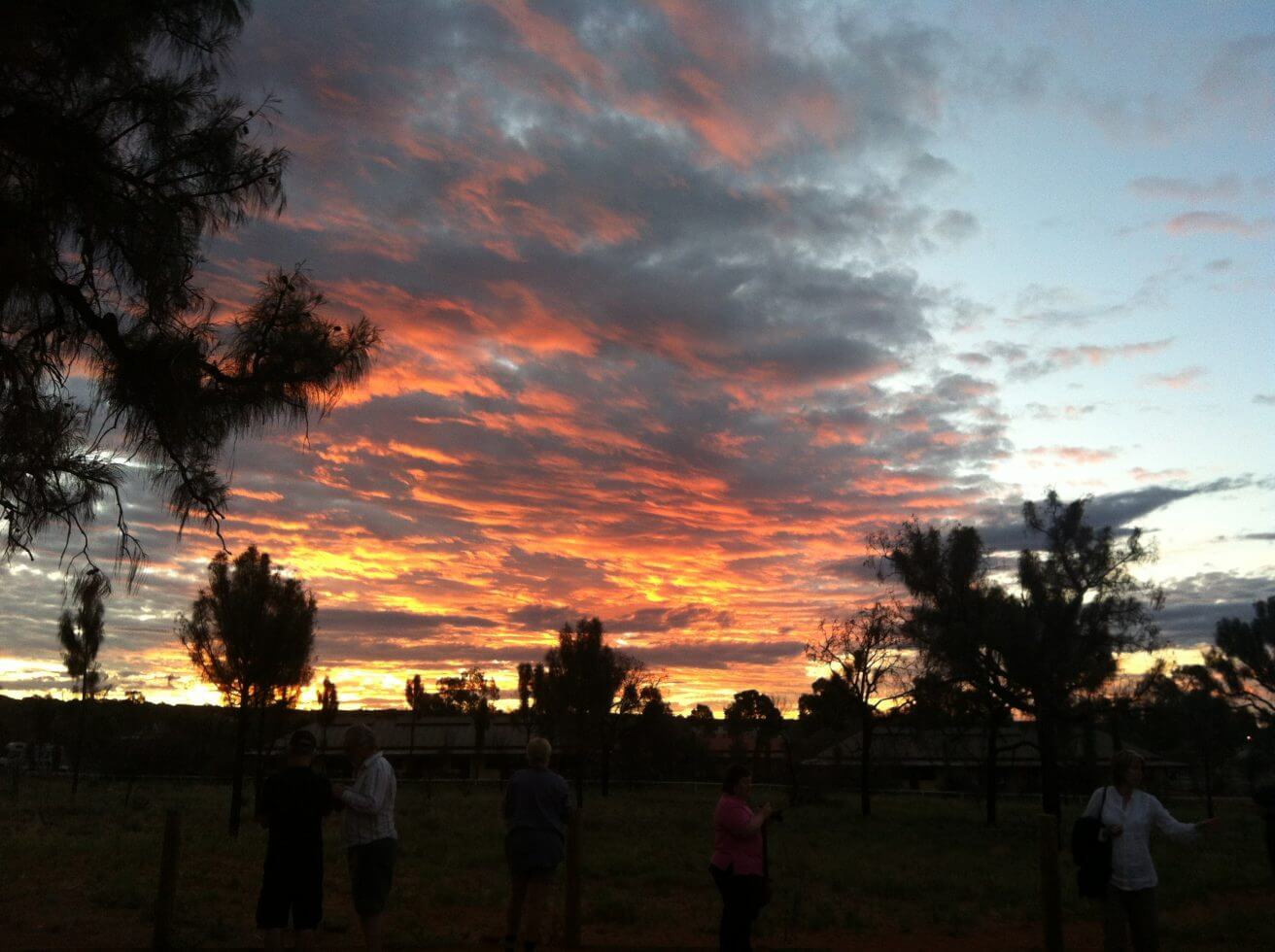 At almost every campsite, well-travelled nomads informed us that we must not miss a visit to the historic town of Daly Waters. So, following their advice, we detoured off the highway intending only to stop for lunch. The tiny town we found there consisted of a pub, a petrol station, WWII army barracks, an old tin hangar and a few dilapidated houses.

Our eyes (and my transition lenses) took a moment to adjust to the cool gloom of the pub?s interior after the blasting glare of the midday sun but when they did we took a quick look around and decided to stay for the night.

The place was chock full of history. The famous explorer, John McDouall Stuart named the area in 1861. Ten years later it was a major watering hole on the east-west stock route as well as a telegraph station. The pub was built, initially as a drovers store in the late 20?s when the airfield was also established. The town later became an important air base during WWII.

The walls were plastered in hundreds of photographs featuring serious sepia toned pioneers and aviators, black & white images of smiling suntanned soldiers and nurses, candid shots of smirking bushmen in hats, stubbies and singlets and more recent happy snaps of travellers from around the world who have all enjoyed the renowned Daly Waters version of hospitality.

The ceilings were adorned in signed football caps, jumpers and socks of all codes. There were dozens of bras, undies, bathers, t-shirts and mascot toys as well as international flags and notes of every currency. 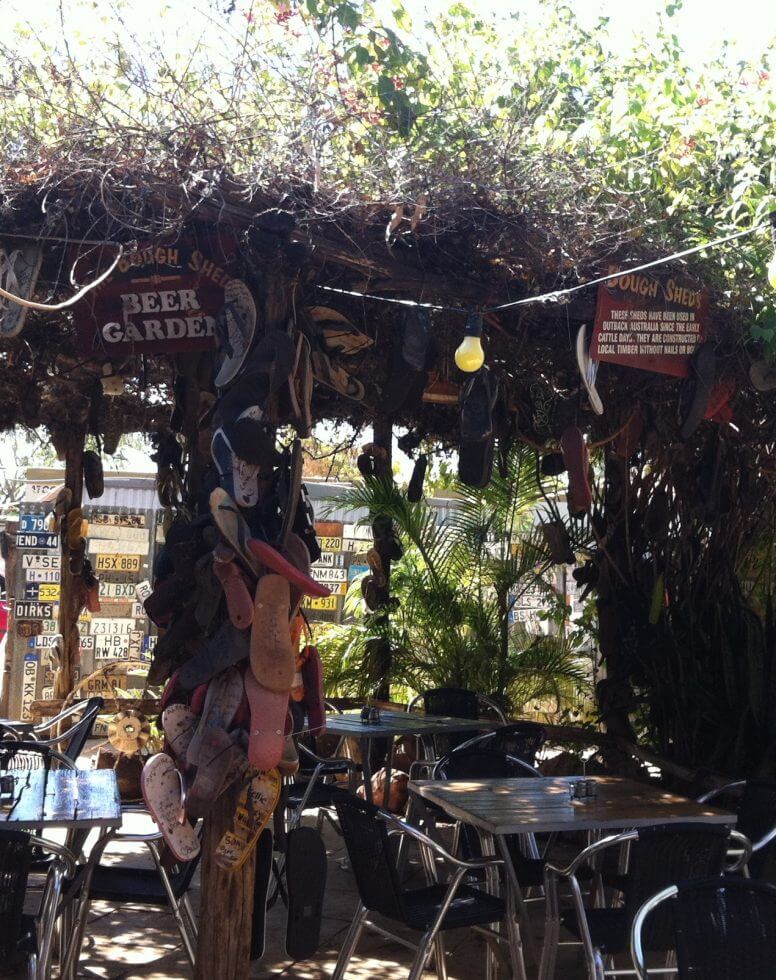 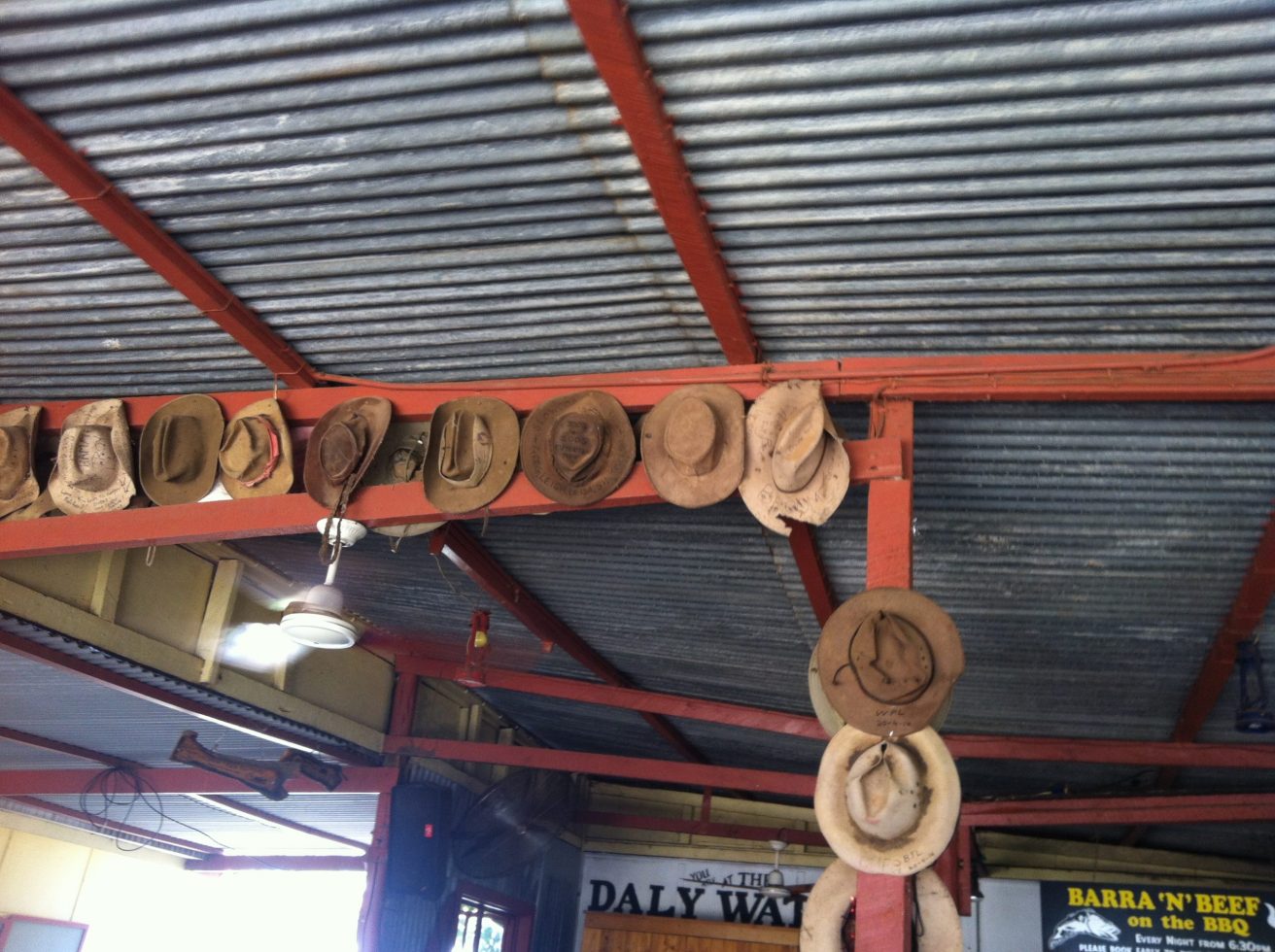 But the quirky d?cor didn?t end there – out in the beer garden the original stone fireplace, the rafters and an old bough shed proudly displayed their akubra hat, rubber thong and antique bottle collection.

Once we’d set up camp (plugged into the power to run the air-con!), I made a bee-line for the swimming pool and the driver went to taste test the beer over at the bar. He soon settled in for the afternoon when he found that the amber liquid was served icy cold and the AFL broadcast was about to begin on the big screen.

Later, we enjoyed the Beef & Barra BBQ special and the ?unique? performances of some

?old time bush balladeers in the beer garden. We also met up with several other travellers there, including our good old Dubbo convoy pals and the ?swagmen? from Queensland.

The next place we had been told not to miss was Mataranka. But just before we got to the town, we pulled over for the navigator to check out the original site of Jeannie Gunn?s ?Elsey Homestead?. I?d wanted to visit the gravesites of many of the characters I?d come to know so well from her classic novel, ?We of the Never, Never?.

The flies nearly ate us alive out there in the steamy bush so we only stopped for a minute then pulled into a cool shady site in the tropical jungle-like surrounds of the caravan park closest to Bitter Springs Creek.

We spent the rest of the afternoon laying back on a noodle as we floated down this tree-lined thermal waterway. Frogs, birds and insects hopped across lily pads in front of us while huge orb spiders in intricately glistening webs suspended across the water, supervised us all.

Later, we rode over to the Mataranka homestead to check out the replica of the Elsey Homestead that had been built for the movie. The driver was more interested in a local bloke who was proudly displaying a massive chocolate brown python he?d just caught!

Then, we held our noses on the boardwalk through the treetops filled with stinky bats to take a dip in the famous Mataranka thermal pools. These natural hot springs enlarged and lined with smooth boulders during WWII for use by the officers stationed out there were not at all what we had expected.?It was standing room only amongst the gossiping grey caravan set. We gratefully headed back to our little piece of quiet, natural paradise by the creek to relax!

Our favourite spot, floating on our noodles at the hot springs. Sound like you are having a wonderful trip. We are now in Cairns, heading West on the weekend.

Wow, you guys really get around … just saw you’re SPOT showing you’re already in the NT. We’re heading south down the WA coast and its magic!!