As we travelled along the Kakadu Highway the next day, the surrounding bush grew decidedly tropical. There were feathered desert oaks, large shady fan palms and clumps of spidery pandanus dwarfed by towering paperbarks with orange-tinted bark.

Amidst all this lush greenery, a few recently extinguished spot fires stood out in stark black contrast. As we drove on, we realised several small bonfires were still ablaze. They looked evenly spaced and seemed deliberately lit.

Up ahead, an old cocky in a battered felt hat sat low in a rusted old ute. As we passed by he raised one hand to his hat in greeting before casually pitching out another fire lighter with the other.

When we stopped at the gate to purchase our parks pass, I mentioned the lazy firebug’s activities. The cashier just laughed. Apparently, it?s common practice for both farmers and rangers to burn off up to a third of their land at this time of year to reduce the undergrowth after the wet.?Just as the locals have been doing for centuries.

She then suggested we call in at the visitor centre to get the lowdown on the showdown. Apparently, the daily ranger-guided activities in Kakadu were not only free but well worth checking out. However, the little bloke declared that the boat was ?itching to get wet? so we detoured past the ranger station and headed straight to the first campsite with a boat ramp.
As I watched the driver load up the boat with more gear than a tackle shop it certainly looked like he was planning be out on the water for hours. This was obviously going to be the Ian version of a ?quick spin?. Luckily a traveller we?d met earlier in Port Augusta arrived to save the day.

Ian soon had him convinced to come along for the ride, so I waved them off on their ?boys own? adventure with a sigh of relief and sat down to read my book under the shade of an ancient gum.

But, the sticky flies and the biting green ants decided I looked far too comfortable for my own good and quickly moved in to attack.?I got up to grab the insect repellent and my trusty fly-net but in my haste, knocked over the one bottle of water the thoughtful driver had left for me.

Now, I?m not sure if I?ve really provided all of you out there in blog land quite enough detail on the conditions a certain lil? blogger is enduring on a daily basis to provide you with this rambling narrative.

When I say it?s hot, I mean it?s bloody hot! It?s a thick sultry yet fiercely searing heat that almost melts your thongs onto your feet. Or as my old dad would?ve said, ?It’s as hot as Buggery!?

Think of the sauna that is your car after you?ve spent a 40? day at the beach or the blast of a hot oven that greets you turning spuds on a sweltering Christmas Day. Now, triple it! Then add a generous dose of flies, midgies, green-ants and mozzies and lace it with foul fumes emanating from a nearby toilet block.

And that was just in the shade.

Suffice to say that it was a rather uncomfortable afternoon. By the time my fearless hunter returned hours later full of stories about the huge fish that got away (of course!) and the big crocs they had spotted, my head felt like it was about to explode.

I was NOT a happy camper!

Ian’s response to calm the situation was to fire up the generator and get the air-conditioner humming. As everybody knows, a hot Dan is a cranky Dan!?But the damage was already done. Never again would he be allowed to head off and leave me dumped like a hitch-hiking backpacker in the middle of a steamy tropical jungle. 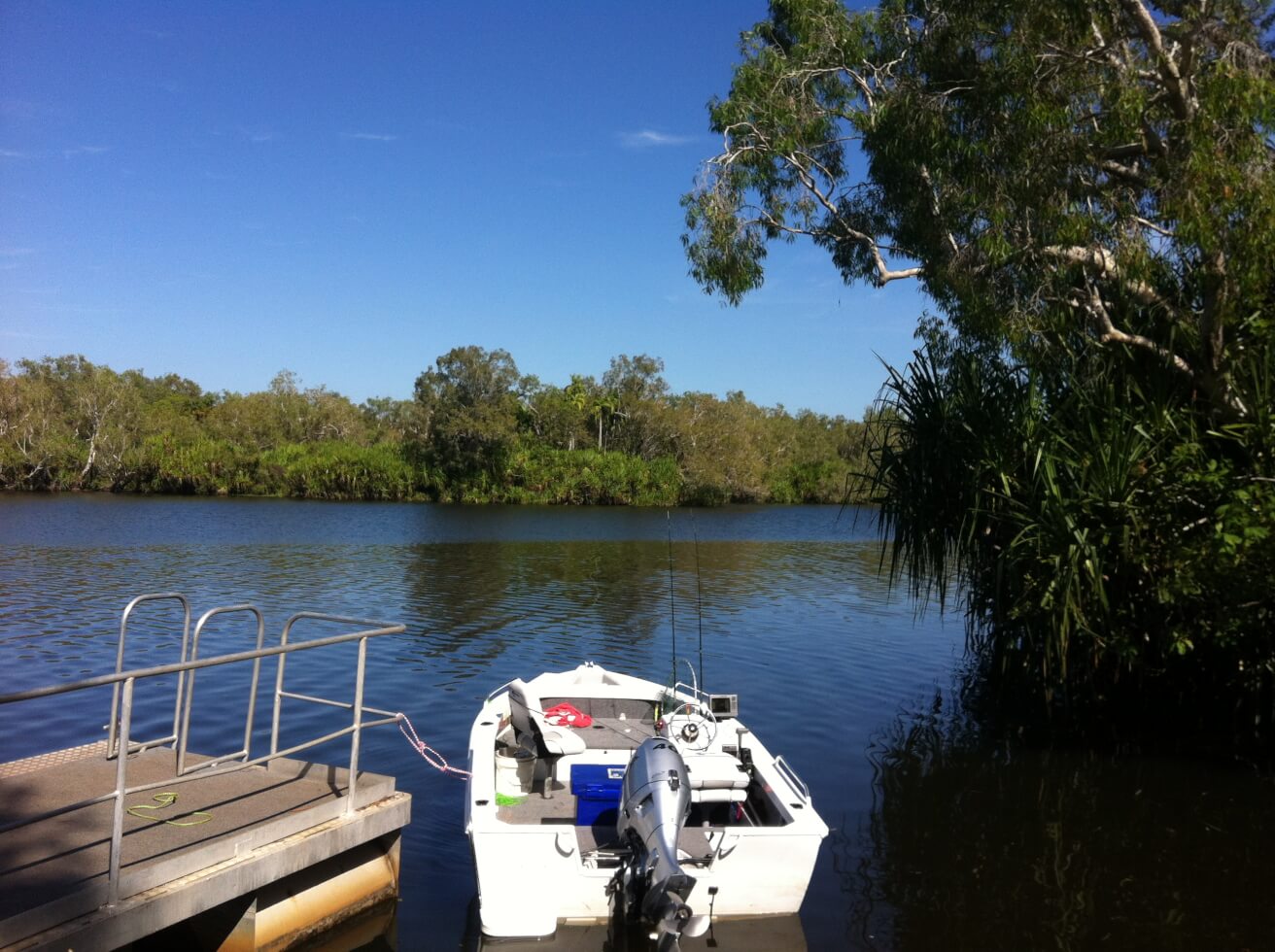 In other words, I was just going to have to go out on the boat?

I’ve been waiting too long for your next episode. Thank you Dan I really love following you (literally) on your travels

Thanks Luv – finally got the internet probs sorted so should get back on track now! See you both real soon!!

Will have to remember that “hot Dan is cranky Dan” line. Reminds me of me! Glad you’re back online so I can catch up on what’s happening 🙂