An official rest day was declared (by me!) the next day.

However, before we could relax there were a few outstanding bounce-hold chores. I left the driver in charge of the seemingly simple task of stringing up a clothesline while I performed my obligatory washer-woman duties.

I returned three loads later to find that not only had he drifted off into neighbouring camps to chat with yet more travellers (surprise, surprise!) but also that he hadn?t quite managed to complete the one job on his list!

But, like all good little boys he was back by lunchtime with a hungry tummy. He was also chock full of useless information and had collected a pile of tourist brochures. He then devoted the rest of the afternoon to reading each one aloud to me while I tried to write this blog?

The next morning we were up with the early bird choppers and cheering busloads of backpackers. In the chill of pre-dawn we pulled on jeans, jackets, scarves and gloves for the scooter ride out to watch ol? red (a.k.a. Uluru) perform her daily sunrise show.

It was too crowded out on the viewing platform for us little ones to see much more than backpacks and beanies so we wandered further down the trail to get a better look-see. The old girl didn?t disappoint – she was in fine form. The morning sun took years off her complexion, smoothing those ancient wrinkles out like a good dose of Oil of Ulan.

After the sun rose, all the crowds vanished but the colours and contours continued to amaze. It was as if she had saved the best till last – just for us!

Eventually, we had to tear ourselves away from her glowing beauty due to a small but nevertheless, quite persistent voice in my head repeating, ?hot coffee, steaming hot coffee?.?We zoomed back to the visitor centre to line up for an overpriced cardboard cup of brownish-coloured warm water with fluff on top. We had just finished this gourmet delight when we ran into our underground church buddies again. They were off to do the base walk around the rock and suggested we join them. 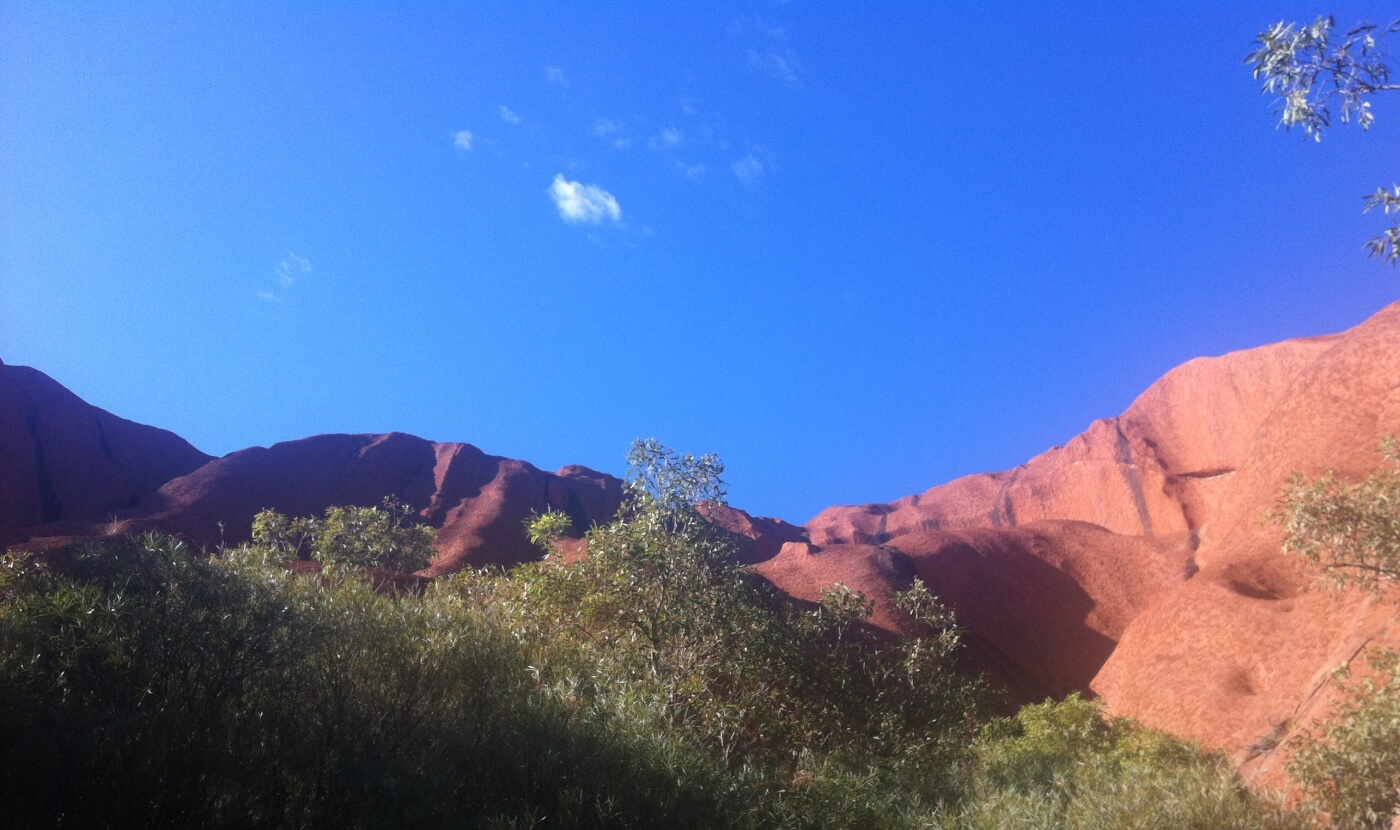 Well, as you may know a certain little fella is always ready for adventure. And, before I could weasel my way out of it we were heading off for a 10km walk.

This resulted in producing a short plump beetroot-faced dressed inappropriately in jeans trudging along a path around an enormous boulder in the steadily rising desert heat without a hat, sunblock, water bottle or even a fly-net.

It was a bleeping long way ? and just between you and me ? pretty darn awesome too! But I will never, ever be talked into attempting such a ridiculous feat ever again.

Ian should have a sore throat by now, with all the talking he’s been doing. As for Oil of Ulan, you’re showing your age now Dan. Sounds like Prince Planet turned up at the big rock too, ha ha. I also reckon that the little fella and his band of merry men (aka any other random travellers) will con you into joining them for another trek around something very soon. Be prepared my dear. Love Pambo xo

You’re onto me Pam, it was certainly a price planet occasion..

Glad to hear you did the trek. Hope to be there in a couple of weeks and weather permitting see the rock in all her glory. Last time it rained (absolutely spectacular) and I took a photo of where Ian is standing. The waterfall took my breath away. Keep safe in your travels.

Hey Danielle,
Nice blog looks like you have enjoyed your adventures you are having. You have some good pictures of the landscape and scenery and well Ian reading. Dad said if you get to Karratha you should visit Daniel.
From Brigitte

Hey Brig, as you know it is amazing to catch Ian reading! We will call in to see Dan the Man. can you text his number to Ians phone? Thanks

The cultural references constantly amuse and amaze. “Harry-have-a-chat” is certainly expanding his repertoire, speaking French an’ all!