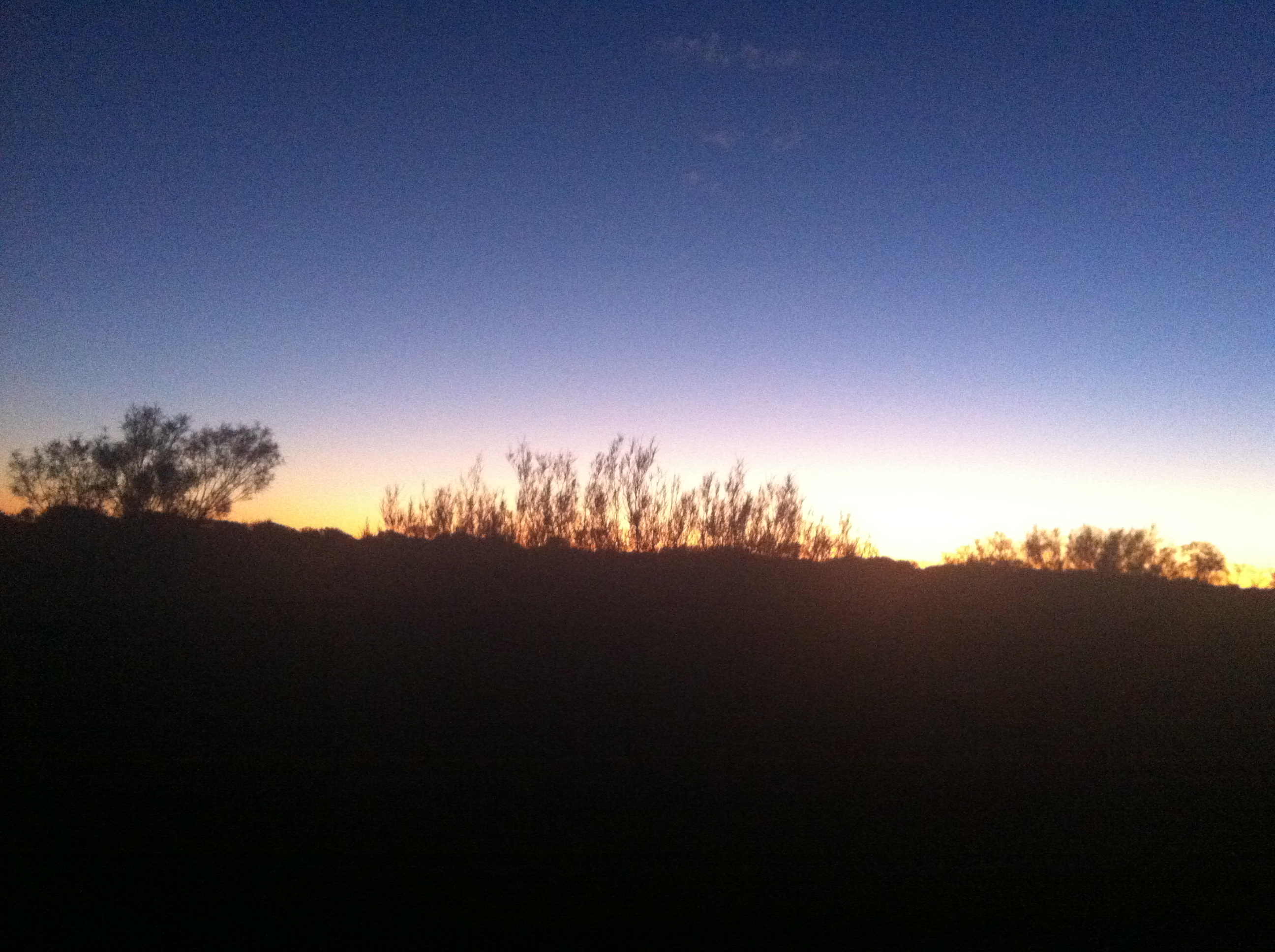 Another rosy sunrise lit up bounce bus jolting me awake me from a restless, dream-filled slumber. The driver rolled his eyes as I recounted some of my strange nocturnal imagining?s over brekkie. As I rarely dream, he reckons it?s a sign that my usually overactive mind has switched into top gear.

Due to our early start, we spotted an abundance of ?flatsie cows? decorating the roadside that morning. There were also a few fat juicy ones still lying where they had been struck ? smack bang in the middle of the road. A flock of birds had completely surrounded one beast but as we approached they flew up and hovered above the road in a thick dark cloud.

I certainly felt there was something eerie about it, almost as if we had witnessed an evil spirit departing its earthly body?no comment was made from the driver?s seat.

These large black birds had a giant wingspan and odd bent beaks. The driver thought that they could have been bustards but I didn?t think we should start calling them nasty names. Although, they did remind me of those vultures that hover over a dying cowboy lost in the cactus-filled desert in those old black and white westerns. My imagination was off and running at top speed now. Perhaps I was suffering from a lack of late night telly and a little too much fresh air?

To change the subject, the driver informed me that during the mine tour in Coober Pedy he had learnt that this entire area had once been an ancient seabed. The opals had later formed in the layers of shells trapped beneath this inland sea.

I must have skipped that particular diorama – but now that he?d mentioned it, I could almost see cliffs in the shape of the rocky outcrops surrounding us. Baby Bounce could see it too!

?This set me off into another fantasy realm. I was squinting out across the scrubland picturing ol? bouncer floating along in the waves when I spotted something glinting in a tree up ahead.

?As we got closer we could see it was a hand painted slogan on a large piece of corrugated iron that read, ?The Return of The Lord is in the Air?.

Was this a sign? Would bounce bus be the next Noah?s Ark?

The driver thought it more likely that our bush church buddies had been out spreading their message far and wide.

I thought the puzzle was solved soon after we crossed the border into the Northern Territory and stopped for fuel. We stepped out into the blazing midday sun to be greeted by none other than the bikers and caravanners? we had met the day before at the church.

Well, the Lord does work in mysterious ways… 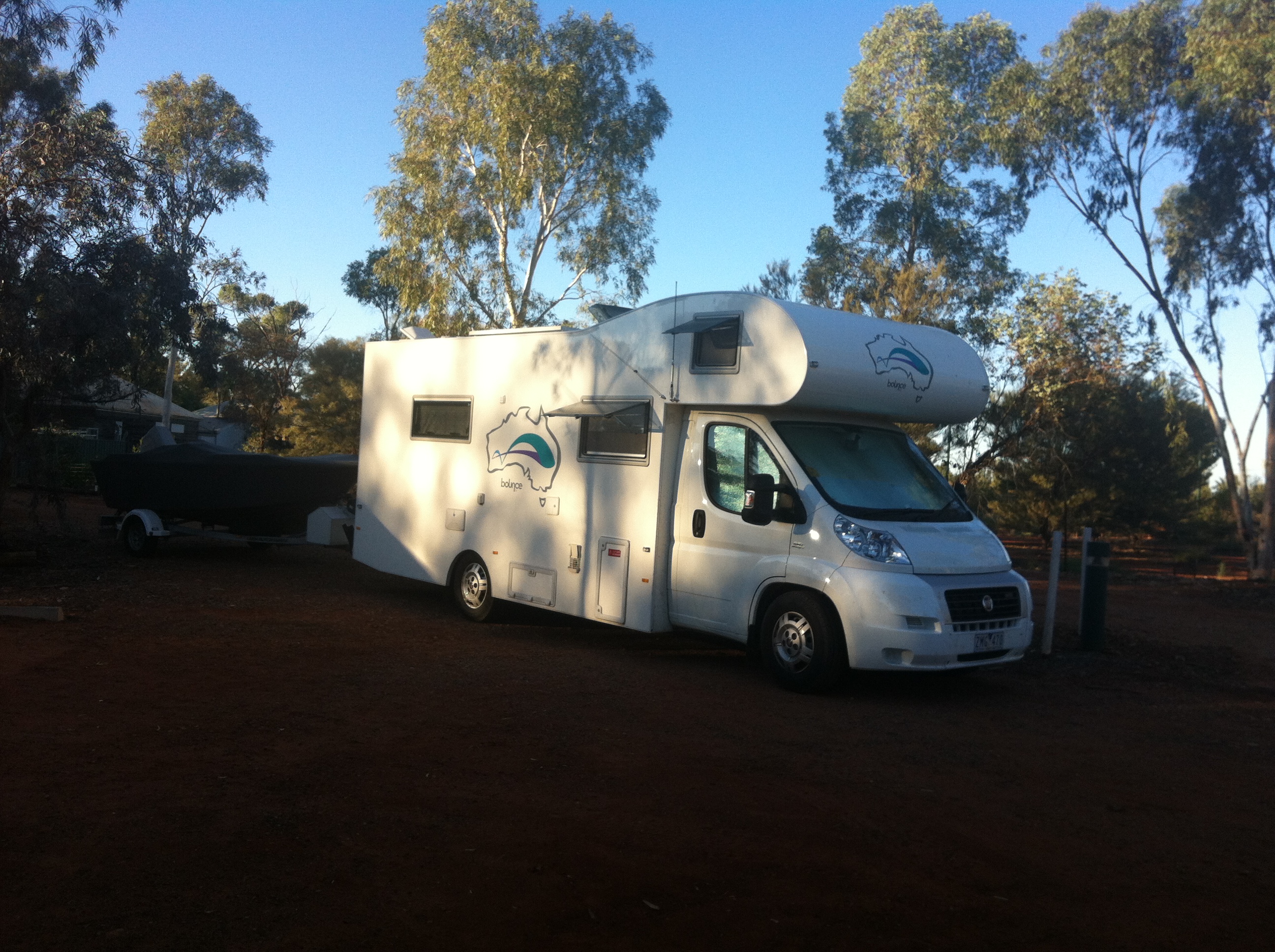 Eventually, we pulled into Yulara campground around 3.30pm. It had been a long days? drive! I would have been happy to relax but one little fella was keen to take a closer look at a certain big red rock.

So we jumped on the scooter and rode out to the national park. We took a quick tour around the cultural centre and by the time we emerged into the fading afternoon light crowds had swarmed into the car park.

It was almost time to flick the giant switch behind the rock and let the nightly entertainment begin. We squeezed in between some French, German and Irish tourists and settled back to watch the show.

Despite the cloud cover it was quite spectacular to watch Uluru go through her costume changes. Her technicolour cloak altered from rust to beige, then gradually transformed into dark pink followed by neon orange. As if by magic, all the surrounding chatter of varying languages and accents gradually subsided to silence.

There was definitely something in the air!

Love the writing Dan! Give a kiss to the driver for me xx

Wow…sounds like quite a spiritual journey!
Hopefully you have more restful sleeps ahead. XX

I wanna know what you were dreamin’ about – right there in the middle of ‘dreamtime’ land!