One of the activities that had long been on the drivers bucket list was to fish the Daly River…He?d heard so many boasts about whopping big barra dancing on the end of a line that he?d been well and truly hooked. On the other hand, every time he talked about the place, it sounded like there was nothing else to do there but fish. Not exactly my cup of tea!?

He put the boat in as soon as we arrived and I drove back to set up camp (I really only drove in and plugged the lead into the power!). We?d booked into a small private fishing camp that had been highly recommended. It was so laid back that as I drove in the gate the owner just waved and told me to ?choose a site and come back and pay later?.

I took myself on a quick tour of the camp, which took all of five minutes. But the scenery blew me away! It was smack bang in the middle of fertile river country surrounded by lush green pastures stocked with glossy thoroughbreds, freshly mown hay paddocks and orchards of mango trees heavy with ripening fruit.

Not what I?d expected – I happily settled in to spend the afternoon reading and writing beneath the shade of ancient gums enjoying a wafting breeze scented by the nearby frangipani.

Our hapless driver had also spent an enjoyable afternoon familiarizing himself with his newly acquired rods reels and lures (yes folks, he?d bought yet another stick!) while cruising past the biggest crocs in the territory hungrily lining him up from the steep banks of the mighty Daly River. Until he made himself a little too familiar with one of the many hidden rock bars just below the surface along the way and smashed a big chunk off his propeller. Not a happy camper!!

The next day we drove into a nearby aboriginal community that had been established as a catholic mission – back in the day. We urgently needed to get mobile phone reception. It seemed our future depended on contacting marine suppliers in Katherine or Darwin to source a new prop. It was a matter of life and death!

At the general store, the driver stopped to check his phone. I took the opportunity to wave at a group of little ones playing in a ditch near their parents. They regarded me silently with their large round eyes. Then after looking back to their mothers? for the okay, they began jumping up and down, waving and laughing. Their small dark faces lit up with wide gap-toothed grins. It was only 9.30am but already the mercury must have been hitting the high 30?s. I moved across to sit in the shade of an enormous gum tree in the beautifully manicured town park.

At each territory town we?ve driven through, a group of locals would be gathered lazing under these?massive trees. Now I understood the appeal. The grass was soft and dewy and an unseen breeze filtered along the ground forming a little oasis of cool.

Across the road, a bell sounded out. My sanctuary was shattered when a dozen pre-schoolers jostled down the staircase shouting out to each other. Their young white teacher called ?pack up time? and they ran in all directions dropping toys in the plastic buckets she held. Some of the more adventurous among them thought it might be a good idea to take the trikes out for a quick spin around the yard but the teacher was onto them. ?Too late bikes now, no touch ?em? she called in pidgin English.

Meanwhile, one little boy with a red towel tucked into his t-shirt leapt into the air every now and then as he ran along the fence line. Another, wearing an enormous bombers footy jumper hanging well below his knees stood shyly eyeing me off. ?Hey lady? he eventually called.

I wandered closer to the fence and he told me about his day saying, ?Me bin this ?ere kinder place?. When I asked if it was fun he grinned, ?Yeah, lotsa fun this one!?

With our new prop ordered we decided to stop for lunch at the historic Daly River Inn. We were informed by the local barman ?front bar for brothers only, whitefella?s out back?. However, it seemed the back door was locked so 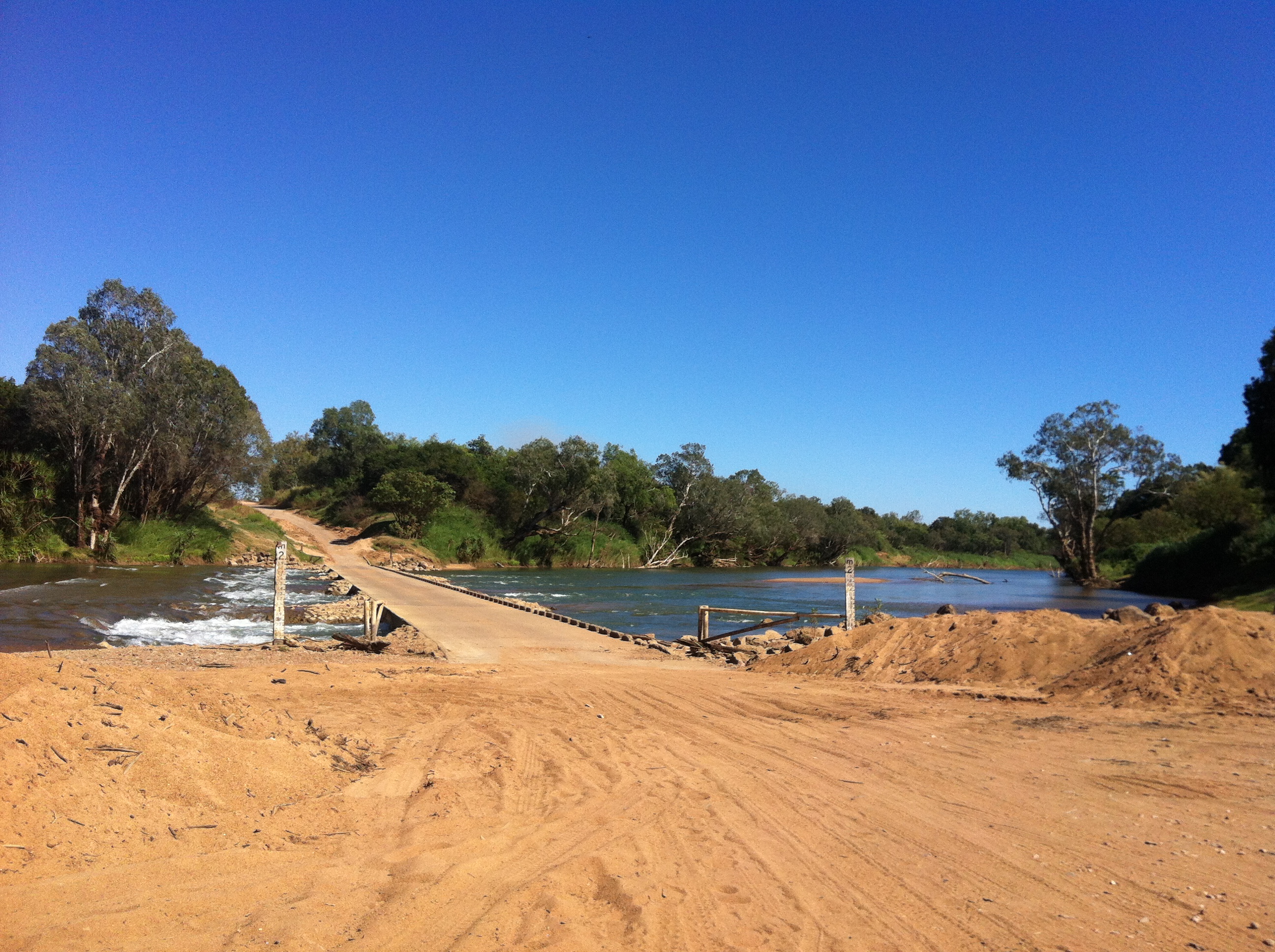 ?took the hint and headed off to check out the legendary treacherous river crossing. For some reason, the local cop jumped in his ute and followed us down there ? just making sure we left, I suppose?

Back at camp it was so cool and shady that I elected to stay put for the afternoon while the great white hunter headed back down to the river. The other fisherman at camp had all taken pity and invited him out on their boats. We spent the next few days in pleasurable company lazily following the same routine and living it up on fresh fish and mangoes!

It was a very relaxing week and we were sorely tempted to stay longer (at least until their big campfire roast night that promised all the trimmings including a local bush band!) but we had to get back to Katherine to pick up our new propeller. So we bid goodbye to our new pals and hit the road.