Top of the Heap

Top of the Heap

We set off in glorious morning sun headed for the infamous opal town of Coober Pedy.

I hadn?t expected that there would be too much to see way out here and had loaded up the e-reader accordingly. But as we drove along I was amazed at the scenery unfolding ahead. I even had to ask the driver to pull over for photo opps, which (as our kids will testify) is seen as a rare treat indeed!

As we passed through the velvety shadowlands of the Gawler Ranges the surrounding land quickly changed from sparse flat scrub amid red rocks then morphed into a wooded bushland rising out of clay-like red mudflats. At one roadside stop the mud was so thick and gooey that I was soon sporting the latest in ?retro? fashions – platform thongs!

However, these views were all soon surpassed by the massive and majestic inland waterways of Lake Gairdner (the ?other? salt lake), Island Lagoon and Lake Hart – almost too beautiful for words.

The Stuart Highway is road-train territory but also runs through enormous unfenced cattle stations with animals often grazing right by the road. The problem is that big fat cows and long heavy trucks don?t really mix. The result is ?Flatsie Cattle? that look like a squeezed out tube of cow shaped toothpaste. Or maybe a cowhide rug with an oversized head and wasted legs flung out at odd angles. Weird!

In between dead cows and breathtaking views the driver had mentioned there seemed to be a lot more motorbikes on the road. When we stopped for fuel he quickly made it his business to find out where they were all going. Amidst the ensuing conversation he learnt many things. Not only that they were all on their way to the Ulysses Club AGM in Alice Springs, but also, ?there?s no rehearsal for life mate ? you?ve just got to get out there and have a crack at it?.

We drove on enlightened by this singular pearl of wisdom till just before Coober Pedy. We had been recommended to check out this great roadside stop with a show-stopping sunset. It just looked like a historical marker signpost but after we drove past the stone monument and down a rough track the land opened out into a protected valley of red dirt surrounded by mulga scrub. 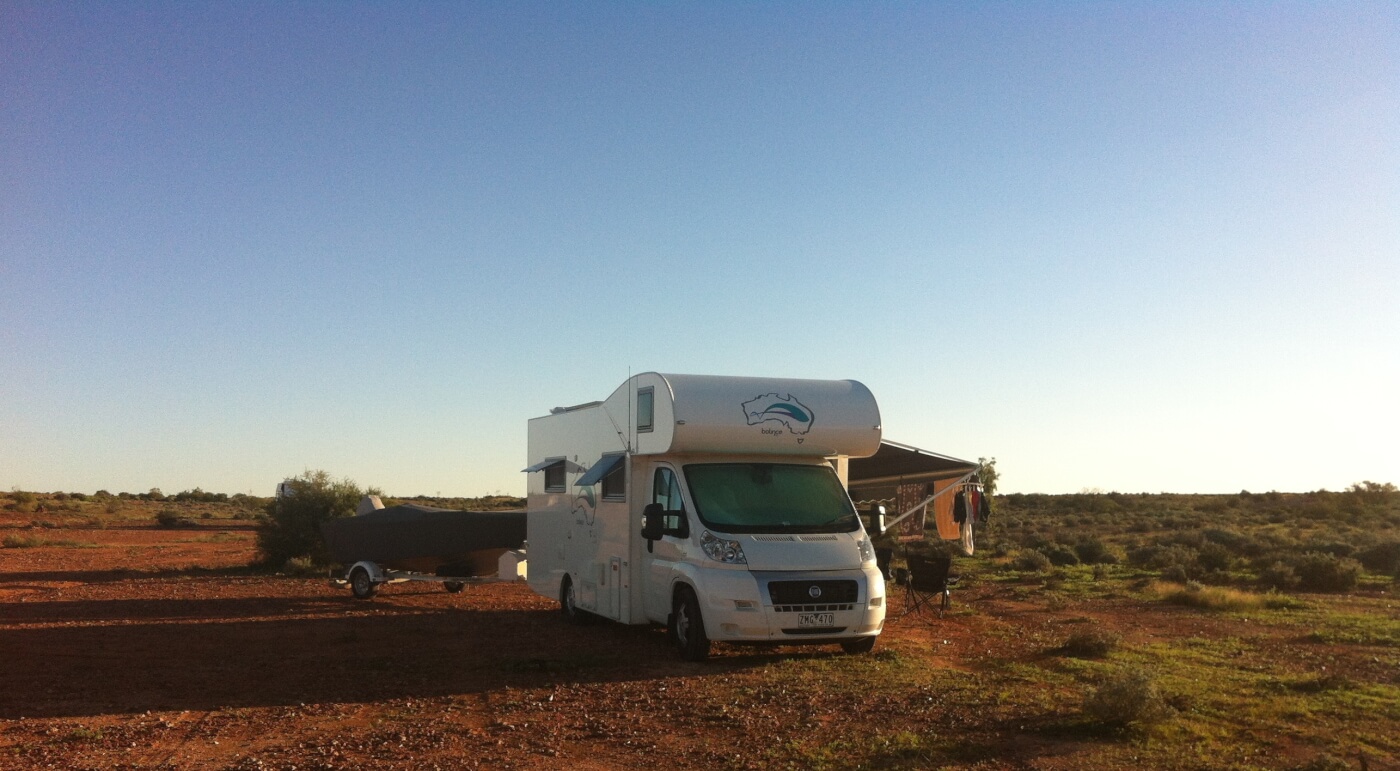 For some reason, the driver parked bounce bus (and baby bounce too) facing towards a huge mullock heap in the distance. This pile of mining waste was decorated in varying shades of red, brown and white dirt with a flagpole atop its highest peak. The driver soon announced his plans. Apparently, it was time for an adventure!

I took this rare opportunity of silence to do some uninterrupted reading. When I looked up again a couple of hours later (yeah well ? it was a good book) it seemed the sky?s nightly entertainment was about to begin. Alas, I seemed to have misplaced my driver!

Now, I will admit there have been times when I?ve prayed for such a vanishing act to occur but I didn?t really fancy being left out here on my own – in the middle of nowhere! Besides, what would I tell the kids, ?Sorry guys, I lost your dad somewhere out in the desert??

It did begin to cross my mind that it may be time to panic when I heard a familiar giggle coming from the caravans way over the other side. Of course, I should have known?it was none other than the little fella himself chuckling along as he recounted his mullock-heaping adventures.

I hauled him back with his pockets full of rocks just in time to help me climb up on the roof of bounce (not unlike Priscilla herself) for a 360 degree view of one of the prettiest sunsets we?ve seen so far. Then we fired up the barbie and dined al fresco under the stars.

So now I have to Google mullock-heaping! 🙂

I’m with young Pambo… “mullock-heaping” – hmmm it could be a new activity for my students?

For your ed-you-cayshun, ‘mullock heaps’ are the piles of dirt they’ve scooped out of the mine…obviously Nic didn’t listen to Miss Brothers in Form One geography. Not sure where you went wrong Pambo, did you take geography at the Reform School for Young Ladies??