We headed further into Kakadu toward the West Alligator River. We?d been told there was a proper concrete boat ramp with a paved carpark and a jetty and everything out there. We were pleased to find it all existed and was actually open to the public.

Deciding to launch the boat first thing in the morning we drove off in search of a likely campsite nearby. But first, the driver took the turnoff towards the aboriginal rock paintings at Ubirr.

Although I had been nagging about doing some of the ranger guided walks, by the time we arrived around 4pm the temperature was up to around 40? in the shade and the humidity was tipping over 80%. It was just too hot for me? so I called a strike and pulled out of the two-hour walk up the cliff to view the ancient artwork and watch the sunset over Arnhem Land. 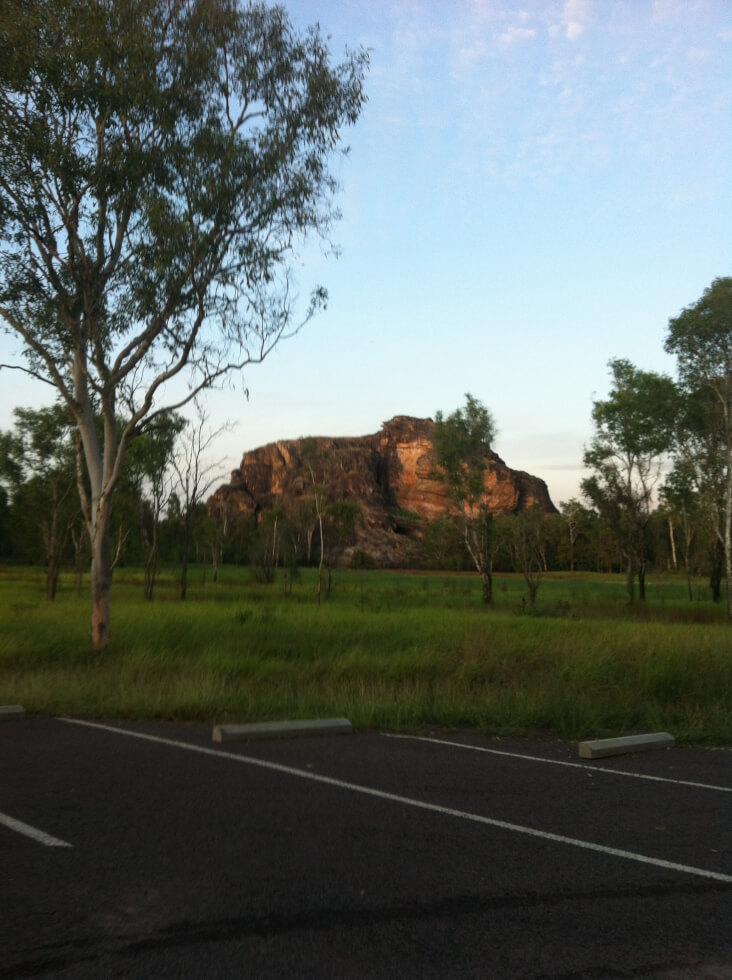 It was probably a bad call that I?ll come to regret, but will just have to add it to the list. Or was it all part of the drivers? dastardly plot to get me to go fishing instead?

We pulled into the campsite and after greeting all the other campers, the driver kindly set up the generator to run the aircon so that I could breathe again. For me there was no point sitting outside anyway as commando troops of mozzies were out in force looking for a feed of hard-boiled Dan. Those nasty critters don?t seem to care for the taste of fried Ian – so he took his fishing rod out for a ride on the motorbike.

He didn?t actually catch any fish but he did meet up with some remote area nurses who worked in the community across the river. They were fishing with a group of aboriginal families out in the middle of the West Alligator River on a ridge of flattened boulders known as Cahill?s Crossing. Ian had been throwing a line in from the bank when a local bloke tapped him on the shoulder and said, ?you come, now?. So he obediently followed his native guide into the croc infested waters. The nurses told him the old guy had been waiting for a whitefella to come along to use as insurance against the crocs!

When he finally returned just as it was getting on dark he was shocked to find me sitting out in the stifling heat sharing a neighbours? campfire. This rather rash social behaviour of mine had been bought on by the sudden stoppage of the aircon, which had led to lil? bounce feeling more like one of those hot potato ovens on wheels.

We were up at dawn the next day. It?s pretty hard to sleep in anyway as generators are banned after 8pm! So the heat only decreases slightly during the night and it starts to mount again almost as soon as the sun rises. 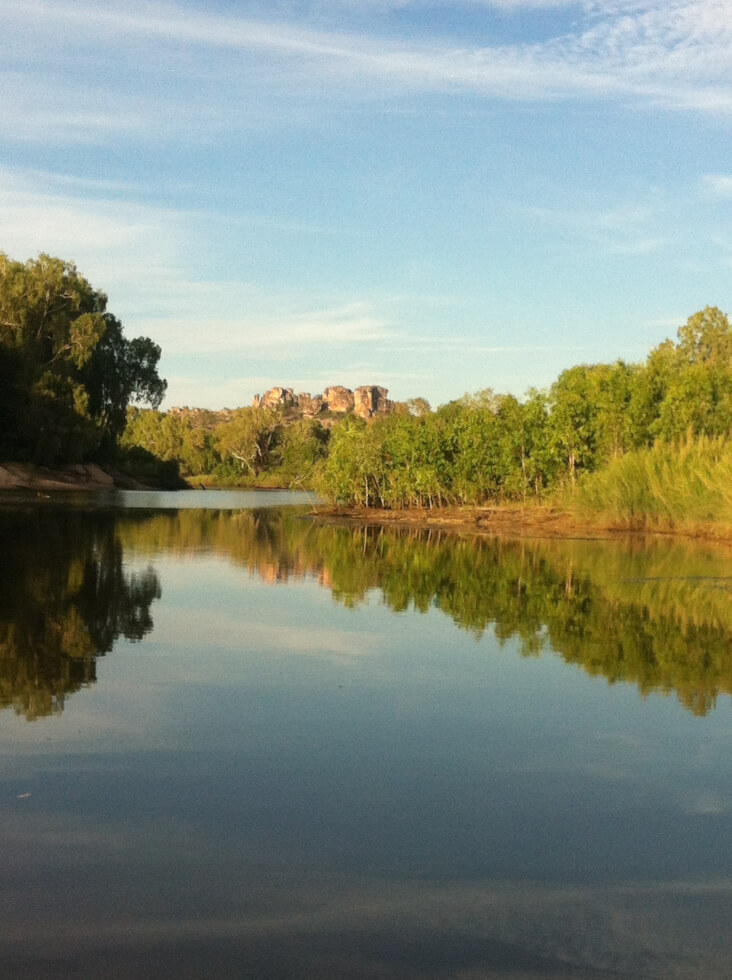 No trouble was had launching the boat and we were soon floating down the wide flat river with a refreshing breeze blowing in our faces. 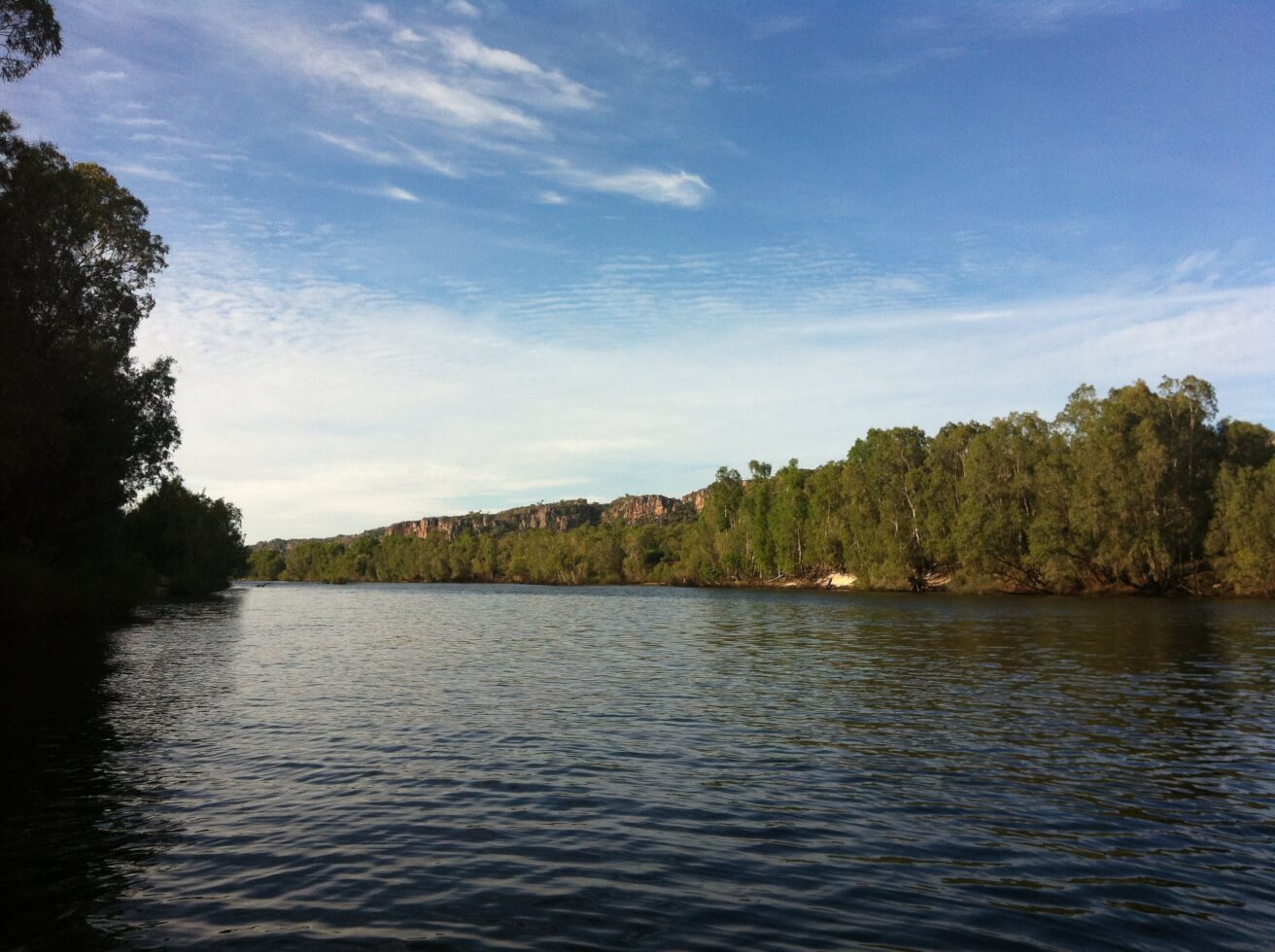 We travelled along peacefully for the next few hours spotting many different kinds of birds and frogs as well as large brightly coloured dragonflies with wings of deep red, vivid blue and lime green. There were also quite a number of crocs sunning themselves on the sandy beaches as well as some rather groovy rock art.

A vertical granite slab on the bank looked like it had been used as an ancient noticeboard. Over the years it had been decorated with layers of faded symbols. From fish, crocodiles, crabs and crayfish to men with spears. I reckoned it was a sign that there was loads of good seafood around but the driver disagreed and continued casting into the reeds. 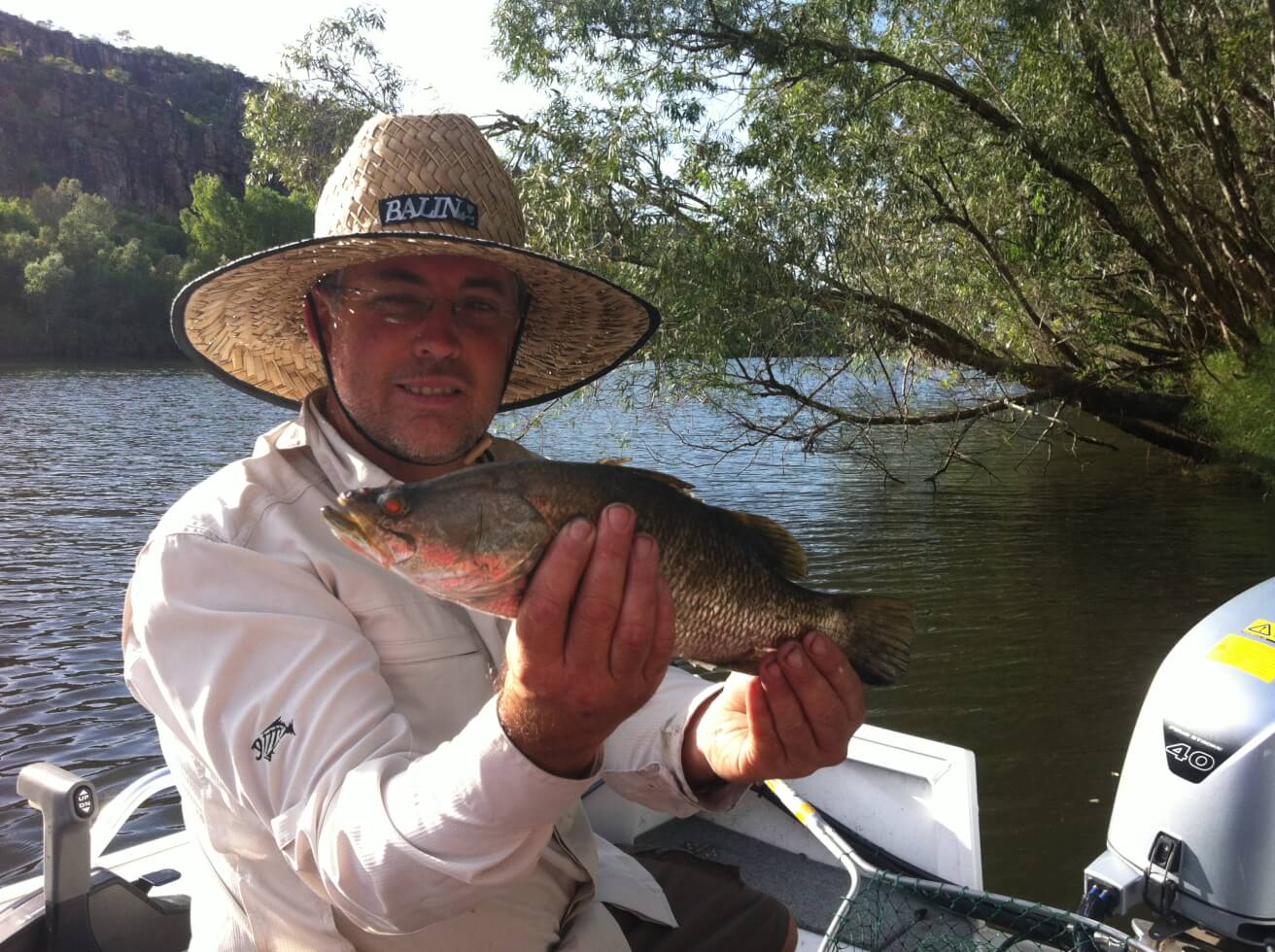 Eventually, we drifted back to the art site and surprise, surprise ? he caught a fish!

Later we reached Cahill?s Crossing just as the tide was just changing. This is apparently the perfect time to catch that elusive big one. The hardworking nurses were out for a fish again (did they even go home?) and called the driver over to join them on their slippery perch upon the rocks. 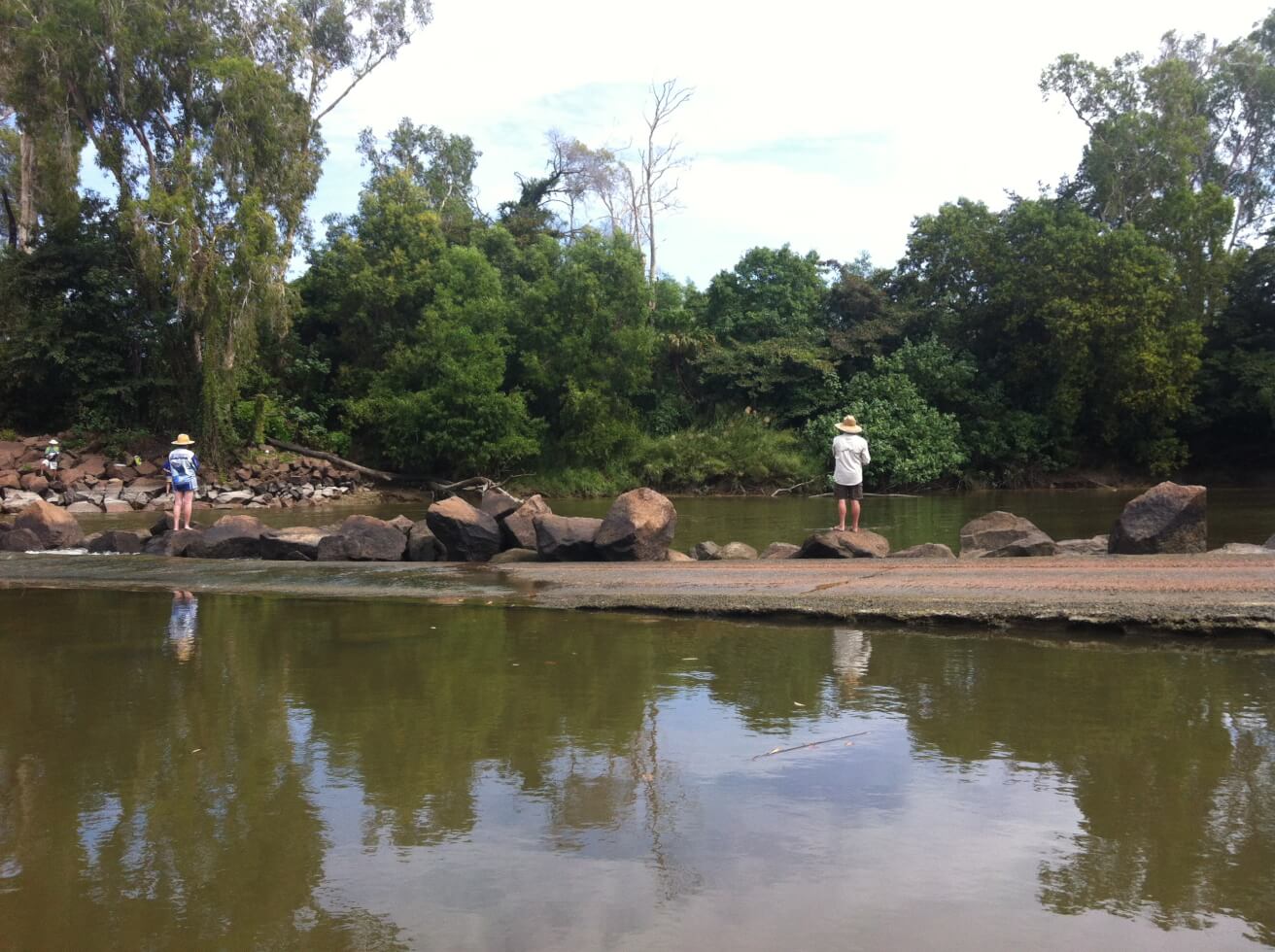 ?Don?t you dare leave this boat?, I squealed as he looped a rope around a very skinny tree and scampered across the heaving tide. Stranded in the blistering midday sun on the muddy mosquito infested bank all I could think about was the location of those yellow-eyed grinning reptiles.

So I guess you?re wondering, ?yeah, what about those crocs?? We later heard that at least one whitefella gets to meet one (up close and personal like) around here every dry season. And the day after we left, a fisherman was taken from this very same river when he leant over the back of his boat to wash out his bucket. His family watched in horror as a huge croc leapt out of the water and grabbed him in one snap of his mighty jaws. 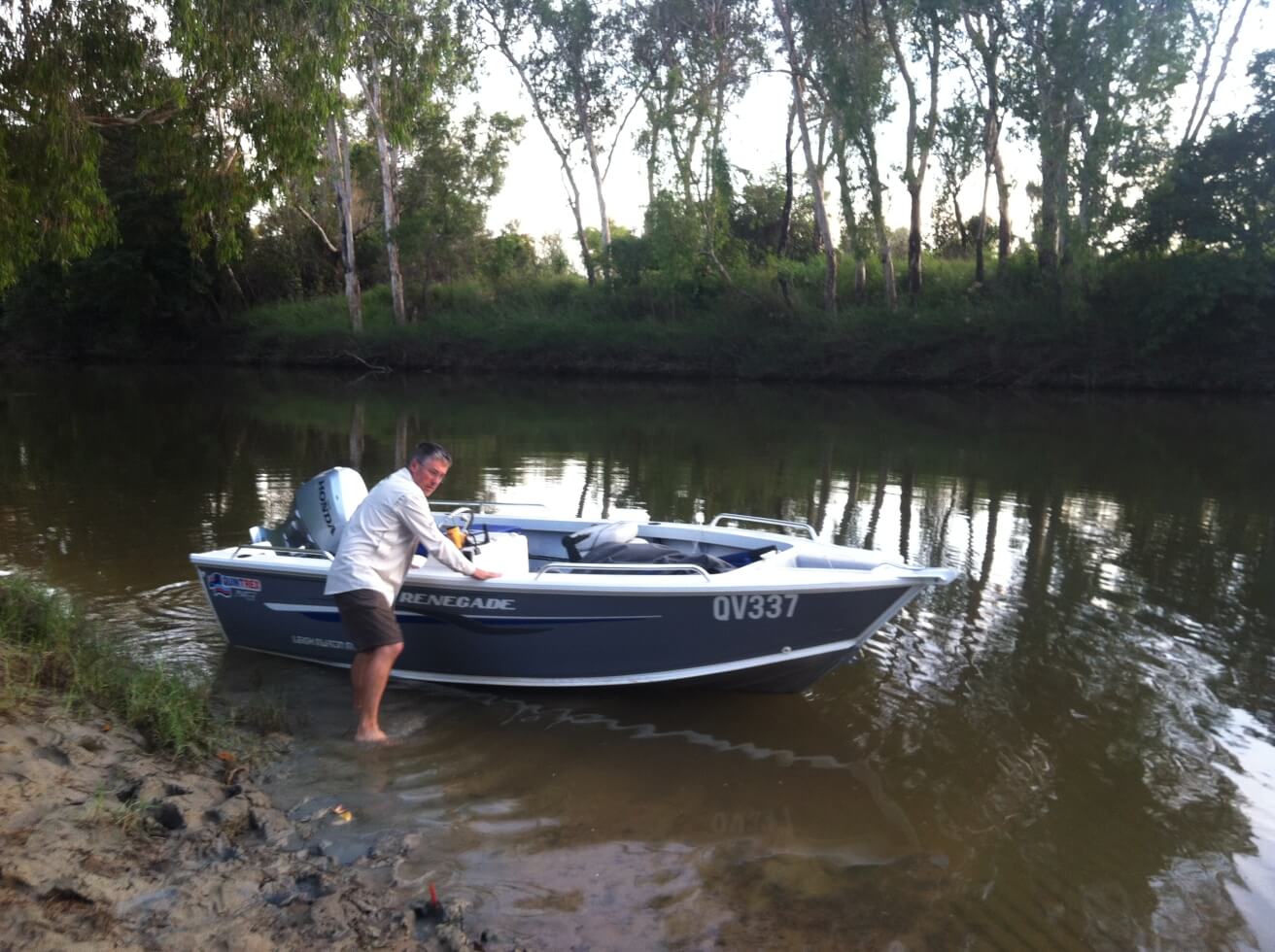 Well after making it out in one piece, we really should have bought a lottery ticket as we left Kakadu that day!

Am glad you lived to tell the tale 🙂